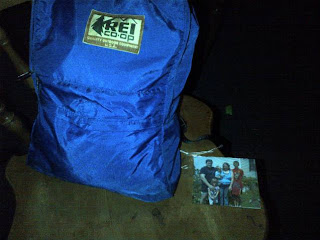 We're getting close to my deadline for total preparedness, or at least as totally prepared as anyone can be!  December 21 is not that far away!  That plus the zombie apocalypse survival class I teach to homeschooled teens made it so I can put off a daunting preparedness task no longer: putting together emergency kits, BOB (bug-out-bags), 72-hour kits, GOOD bags, or whatever else you want to call them for the kids.  Mine was one of the first things I did, my husband's is supposedly an ongoing project (I put him in charge of making his own so he'd know what all was in there and how to use it all.  I probably should check in on that project soon), but the children's bags is a project I just haven't wanted to face.

Part of what has made me procrastinate on there is the variety levels this project entails.  Obviously (I would hope), my 3 year old's bag is going to contain different things than my 13 year old's!  After months of pondering, I think I have it figured out.

A teenager should be able to handle the same things as an adult in an emergency situation, so my 13 year old's kit will be virtually identical to mine, with the possible exception of weaponry.

My 3 year old will only carry about a thousand calories of food for his own use, a small 1/2 liter bottle of water, a change of clothes, an emergency blanket, and a small lightweight toy (yay!  A productive use for a Happy Meal toy!), all in a tiny backpack that he can actually carry for a long time.  I figure if he's lost and on his own for more than a day, he's going to be beyond caring about food.  I don't know for sure if he'd know what to do with the emergency blanket, but I figure if someone found him if he got separated from the family, it would give them the means to warm him up quickly if needed.  I may stick some glow sticks in there to make it easier to find him at night, but at this point, they aren't in there.

My 5 year old will have the same things as the 3 year old, but will also have toilet paper, a small tarp, and some paracord, since she's big enough to wipe her own bottom, the knowledge to make a "fort" out of a tarp, and the ability to tie some knots along with the mental development to figure out situations in which it would be helpful.

There is a huge jump between the abilities of my 5 year old and my 7 year old!  He's gone some wilderness survival classes and has always had a lot of interest in survivalism, so I will pack his bag with most of the items found in a teen or adult's bag, with the likely exception of a knife, since I'm not sure I quite trust him to use one unsupervised just yet, and the possible exception of the means to make fire, since I think I want to work with him a little more on responsible fire usage before he's ready to make fires entirely on his own.  He will be getting a tent for shelter (even though he knows how to make a lean-to if needed), iodine tablets for water purification, compass, map, and first aid kit in addition to the basics of clothes, food, and water.  Things like fire-making tools and knives will be added as we deem him responsible enough to use them.

All the children, as well as my husband and I will have an item that has the largest chance of saving the kids' lives than any other if they were to get separated though.  Attached to all the bags, there will be a water-resistant family picture.  On the youngest two kids' tags, it will also have a note saying their names and that this is their family, and asking "have you seen them?" so if they lack the ability to communicate clearly that they are looking for their family, their possible rescuers would still be able to figure out to whom they belong.  In an actual bug-out situation, I would likely take the tags and attach them to the children on their belt loops or something, so that if they lose their bags somehow, they can still be more likely to be reunited with us.

Do you have bug out bags for your kids?  If so, what do they contain and what ages are the kids?