Like most things I've learned about gardening, I heard about the Native American "Three Sisters" of corn, beans, and squash, thought it was cool, did a little half-assed research, and went for it...probably totally wrong!

Actually, in this case, I'm almost positive that I totally screwed it up, since I got things all planted, stepped back, took a look at it, and said to myself, "Now why the heck did I do it like that?  That make no sense!"

I get ahead of myself though.  So let's look at what I did.

First off, only two of the 6 beds I'd prepared in the back of the lot will actually be Three Sisters, because I think planting more than that of beans would give me way too freaking many beans.  Plus I ran out of beans.  Okay, I have a few beans still laying around, but I want to save them in case I need to replant or in case I really, really screwed up this year and need to save them for next year.

You might ask, "Why don't you go buy more beans?" which for most people would be a perfectly normal and rational answer, except, like I said, that would be way too freaking many beans and these aren't beans you can buy at the store.  These beans are special.  I got these from a Facebook friend last year (okay, these beans' daddies and mamas.  I saved these beans from last year's harvest) who said that her grandparents brought them from Italy like a hundred years ago (not these exact beans.  The beans' great-, great-, great-....grandparents) and they've grown them in her family ever since.  They look a lot like dragon's tongue beans

, but they are a pole bean that gets crazy long rather than a bush bean.

Anyhoo, here are the beds, as planted yesterday: 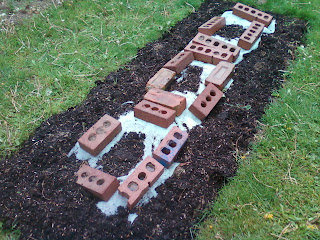 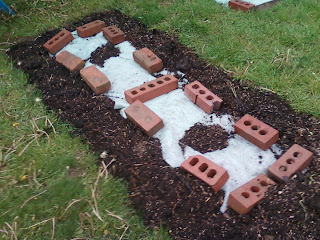 The first picture has corn on the outside, beans planted just inside the corn, and blue hubbard squash

in the middle.  The second one has corn on the outside, beans planted just inside the corn, and pumpkins in the middle.  Oh, and that isn't "normal" corn.  That's Oaxacan green dent corn.  I don't even know how to say that, that's how cool that corn is!!

I remembered from my half-assed "research" that there was a lot of weeding involved in the early steps of this mound building, so I cheated and used landscape cloth to keep weeds from going nuts while the squash is getting big enough to act as a natural mulch.  I think the beans and the corn will grow just fine where I put them, but now I'm worried that the corn, especially with those crazy beans growing on them, will shade the squash too much and not let it thrive!  Oops.  The bricks are just there to weigh down the landscape cloth, since I didn't have anything to stake it down really well and don't have any actual mulch handy to just kind of bury it with.  The directions said it could be covered with rocks.  Bricks, rocks, same diff, right?

I think my thought process had more to do with conserving landscape cloth (bought on sale for another project and just kind of wandered into this project) and chicken poop than the welfare of the plants.  Further proof that I'm a bad, bad gardener.  *sigh*  Hopefully it will turn out okay!  Tomorrow is another day, and I'll probably plant my remaining beds of corn and vining things with a little more thought to how the plants will like their new homes!

I also remembered that there was supposed to be a kind of staggered planting, that the corn was supposed to be planted first, then the others later, once the corn was a bit established.  That I did consciously and blatantly ignore.  I figured with this plant configuration that the beans could be laid out on the cloth until the corn got big enough to wind the beans around and that the squash was far enough away not to worry about suffocating the other plants, since by the time the squash got that far, the corn and beans would be holding their own.  So I guess I did have plant welfare in mind a little bit, even though I went a completely different direction than the pile-up-dirt-and-throw-three-different-kinds-of-seeds-in-it direction that I first thought of when I heard of Three Sisters mounds.  Maybe there is hope for me as a gardener after all!