I've been in love with calendula salve for years.  I've long thought that I should start making my own instead of paying a small fortune to buy it from craftspeople that make it as a hobby or sideline income or even at a health food store.  I always assumed, for what I paid for it, it would be expensive or difficult to make.

Turns out it really is simple to turn these lovely flowers: 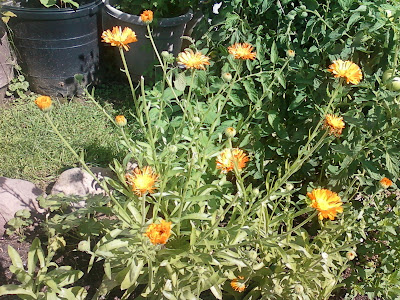 into this slimy greenish goo that is good for a multitude of skin issues, from burns, including sunburns, to chapped skin to diaper rash to reducing pain or inflammation: 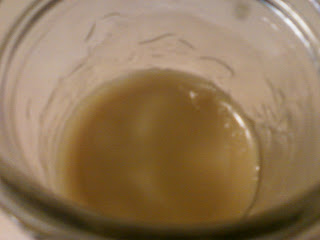 Really, it should be stored in an opaque container, but I didn't have one handy, so I just stuck it in a jelly jar and am keeping it in a dark cabinet that rarely is opened and never sees sunlight.

It didn't even cost much.  I paid a whopping 9 cents for the flower seeds (on clearance in May, even though they weren't supposed to be planted until June or July in these parts).  The beeswax I've had so long I don't remember how much I paid for it, but I don't think it was much, since I bought it right from a beekeeper (I'm hoping that by the time I run out, I'll have convinced my hubby that I should have a beehive somewhere so we don't have to pay for anymore honey, beeswax or any other bee products we might wish to use).  I used a generic olive oil, so that cost about $0.75 for this batch.  I'm not even sure how little the drops of tea tree oil and vitamin E oil cost, but it has to be pennies.

I chose to use tea tree oil and vitamin E oil because A) they are natural preservatives so I should be able to use what I make until it runs out, however long that should be; and B) because I feel they give the salve some extra umph.  Tea tree oil is excellent for just about any skin problem whether it be fungal, bacterial, viral, insect-al (pretty sure that isn't a word, but it soothes bug bites and stings, so I'm using it), rashes of mysterious origin, burns, cuts, scrapes, and more.  Vitamin E helps prevent scars, so I thought that would be nice to throw in too.

Gently simmer calendula petals in olive oil in a glass or stainless steel pan for 2 hours (take care that it never reaches a full boil or you are likely to have serious problems), stirring occasionally with a wooden spoon.  Strain petals out of oil using a piece of cheesecloth or fine strainer.  Melt beeswax in a double boiler (I actually just wiped the remaining petals out of the pan I'd been using and let the heat of the pan melt the wax, without turning the burner back on.  Technically, beeswax should be heated with a double boiler though).  Remove from heat (if you actually had it on heat and weren't a rebel like me).  Mix in the strained oil.  Add drops of tea tree oil and vitamin E oil.  Stir together well and pour into container for storage.  Allow to solidify before using.