For a long time, I hated leftovers.  There was never enough for everyone to have some another time and I strongly dislike preparing special meals for anyone that couldn't have some of the leftovers.  I'm not such a fan of eating the same thing day after day anyway.  I came up with a few ideas to manage leftovers though, so now we almost never have leftovers go to waste.

1) Send the leftovers as lunch:  This works best if there is someplace to reheat it, but even if there isn't, it may be possible to use a wide-mouth Thermos to keep something warm until lunchtime.  This is my favorite way to handle a single serving of a leftover meal.  It also works very well for larger portions of leftovers that freeze well.  I freeze individual servings in reusable freezer containers

to be used as homemade microwave meals for my husband to take to work as needed.

2) Have one or two dinners a week be "leftover" night.  If there are a lot of leftovers over a few days, I'll set them up buffet style on the kitchen counter and let everyone pick out what they want on their plate.

3) Use components of previous meals to make a new different meal a different night.  For example, last night we had baked chicken, rice, corn, and carrots.  I cooked up a whole chicken to use over several meals and I made a lot of extra rice so one of those meals will be chicken fried rice (chicken recipes will be for a future post).  Another example is our dinner tonight--a couple nights ago, we had tacos and, since the taco meat isn't or family's favorite part of the taco, we usually have a lot of leftover taco meat.  Rather than having to splurge on taco shells twice for one week (or freezing the meat for next time we want tacos), I'll frequently make another recipe involving taco meat.  I have two such recipes right now, so we have options.  Tonight, I'm planning on serving "Mexican egg rolls".  They are neither truly Mexican (since I invented them and am not Mexican), nor are they probably truly egg rolls (what actually makes an egg roll an egg roll anyway?), but they use an egg roll wrapper and leftovers from taco night, so that's what I call them.  My oldest son is kind of a picky eater and doesn't care for any sort of egg roll, so when he's here, I use my other taco meat leftover recipe--soft taco casserole.  I really like using these "planned leftovers", since it cuts down considerably on prep times for homecooked meals for the family and makes it easier to consistently get good food on the table!

Since we are dealing with leftovers, all quantities in these recipes are approximate.  Adjust according to what you have available and/or taste. 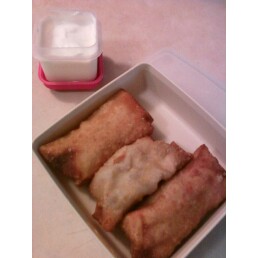 Pour vegetable oil into a deep frying pan to a depth of 3 or 4 inches. Heat to 350 degrees (or until a wooden chopstick stuck into it boils almost immediately). Carefully place egg rolls into the hot oil and fry until golden brown. When removed from oil, let drain on paper towels.

For a healthier variation (that my family agrees doesn't taste nearly as good), lightly spray egg rolls with cooking spray, place on a baking sheet and bake at 425 degrees for 10-15 minutes.