For years, I struggled with finding a way to organize my recipes.  This was made worse by the fact that I have a tendency to hoard recipes like I do books.  Despite having all these recipes around, I could rarely find the new recipes I wanted to try because they were always so scattered...and I often couldn't find recipes that we had already tried and liked because they had gotten mixed up with everything else.  For a while, I tried copying favorite recipes onto index cards in a little binder, then another time in a recipe box, but it was such a pain to copy the recipes into the correct format!

Finally, I realized I needed my own cookbook.  I found a large binder, about 3-4 inches thick that wasn't being used for anything.  I found some dividers and page protectors and put them in it.  I then filled the page protectors with the recipes, filed by recipe type, in alphabetical order by what I actually call them (which may or may not be the same as what the page actually says...that is an area for improvement, since it makes it harder for others to use, if anyone else actually ever used my cookbook!) that we liked as I found them. The dividers I found have pockets in them, so I put recipes we haven't tried yet that I'd like to try, sorted by category, just like the recipes that we have tried.  If I don't feel like photocopying a recipe from a cookbook, I can just put a page in the book that says the name of the recipe and the book and page it can be found on. 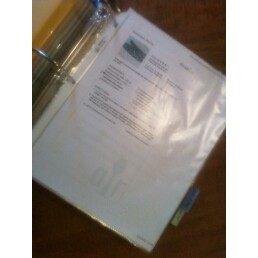 This system lets me keep all my recipes, regardless of the source in one convenient location.  It also lets me make important notes, such as who in the family likes it or doesn't like it and any variations or alterations that I've made to the original recipe.  Pictured here is a recipe I originally printed off the internet, but if you look, you can see that I've made a number of changes to it to suit the ingredients I typically have on hand and my personal taste.  Using a binder also gives me flexibility to add recipes or remove them as we make new discoveries or the family's tastes change.

One of the other bonuses of this system is that it is going to help me give the kids a meaningful gift as they move out of the house.  When they grow up and move out, I plan on making duplicates of this binder for each of them, so they can have "Mom's cooking" where ever they go in life.  That's a long way off, so I may need to improve the system more before then, but it is a way I hope to be able to maintain a connection to the kids forever.