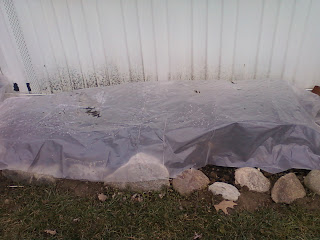 Well, now they are forecasting a whole lot of ice to be deposited on the ground over the next couple days, so I covered the garden bed I (foolishly) planted outside already.  I hope that the seeds have more sense than I do and don't sprout just yet.  Cold hearty as they may be, I don't think they would fair well as seedlings frozen in a block of ice.  I put a tarp over the plastic sheeting for now too and weighed it down with bricks, so I think the whole thing should be fairly protected from the ice sheets and I'm pretty confident that no seedlings will break ground until it warms up, so it should be okay.  I hope.  I'm not doing anything special to the peas in the buckets at this point, but since they are right outside the front door, I can pull them in quickly if I change my mind and decide they need rescuing.

On the (more sane) indoor front, as I reported on this blog's Facebook page the other day, several of my seedlings succumbed to children's curiosity and were plucked before their time.  I've made the decision not to replace them at this time, since I planted enough extra that I don't think it will be an issue.  I did rearrange things, so hopefully their will be no future incidents though.  I elevated the shop light all the way up as high as it could go, then I put the seedling tray on top of a grow light my mom gave me after I bought the shop light (I haven't even tested it to see if it works, but it works to get the seedlings to safety!).  This has freed up a ton of counter space, and hopefully gets the seedlings out of temptation's way when it comes to the kiddos. 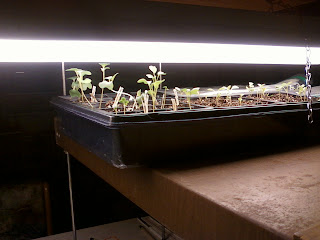 In other news, since I used up all the carrot seeds (or maybe I spilled some of them; doesn't seem like I could have really planted that many!) I had already, I ordered some more from a different source

.  Same variety, just a lot, lot more of them!  I think Scarlet Nantes are definitely the way for me to go, since they still have that normal carrot shape that makes it easier to process, but they are still short enough to work well in my garden boxes.  Last year, I tried Parisian carrots

, which were as cute as the dickens, but hard as heck to process when it was time to harvest them!  Since carrots freeze pretty well, at least for use in casseroles and such, I want to grow as many as possible.  I know we'll use them all.  I'm already almost out of last year's carrots.

I was hoping to have the grids laid out with twine on the garden boxes by now, but when I had the time to do it, I couldn't find the nails I needed to secure the twine and, once I found the nails, I didn't have the time!  It was an absolutely gorgeous day out yesterday too, if you don't mind the clouds, so it is a real shame I haven't done it yet.  I'm thinking about doing it today if the ice storm holds off as punishment for not doing more outside yesterday, but, I'd probably be better off waiting another week or so until the next warmish weather hits, so the twine doesn't get worn out as quickly by being in that ice.

So, in summary, in case you are keeping score, outside I have peas, carrots, spinach, and onions planted.  Inside, I have cabbage, broccoli, and lettuce seedlings, as well as three kinds of tomatoes and some peppers trying to germinate on paper towels inside plastic bags. 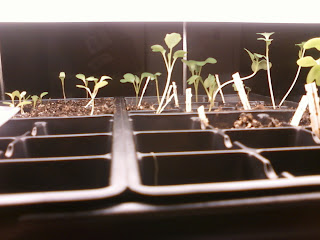