People seem to have the impression that because I demand plants grow in environments they might otherwise not consider growing in, like boxes and buckets in a trailer park lot, that I have a green thumb.  I assure you, I do not.  To demonstrate this, less than a week before I attempt to start a large batch of seedlings indoors for the first time, I believe I killed my aloe plant that I keep in the kitchen in case of burns.  I'm not sure whether it was the tumble it took off the counter about a week or so ago when my husband tried to reach around it to the outlet to plug in his electric skillet to make a surprise breakfast of french toast that knocked it into the sink and shortened all of its leaves considerably and dumped a lot of the soil out of the pot, or if it was the subsequent refilling of its pot with really cold dirt from outside, or if it was overwatering since then, but it doesn't look so good.  I'm pretty sure the leaves aren't supposed to be squishy too.  I've had this plant for about 10 months and it has never been squishy before, so I don't have a lot of hope for this poor thing. 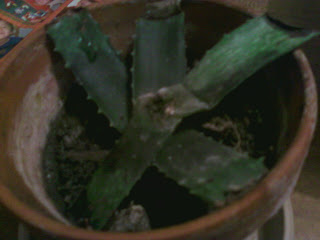 And then there is the spider plant that I have just because someone gave it to me once.  I've managed to keep it barely alive for a few years now, but it always looks so sad, I live in constant fear that someone is going to call Plant Protective Services on me or something. 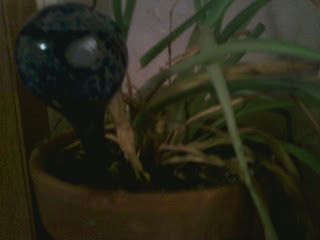 I just bought it that globe thing that is supposed to keep it watered about a week ago, in the hopes that would keep it from getting so dry, but apparently I still have to remember to fill that thing!

Fortunately, we live in a region that plants that are left outside usually get watered fairly regularly, without me remembering.  But with the limitations of seasons here, I really wish I was a bit better about growing things inside.  That's a large part of the appeal of an Earthship for me, I think.  It has that gorgeous indoor garden build in, as part of the house's water filtration system, so the graywater system takes care of the watering for you.  It almost makes me think there'd be a chance I might not necessarily kill off any plants in an Earthship garden!  In the meantime, I guess most of my gardening efforts will have to stay outdoors, where at least Mother Nature will water them if I forget!