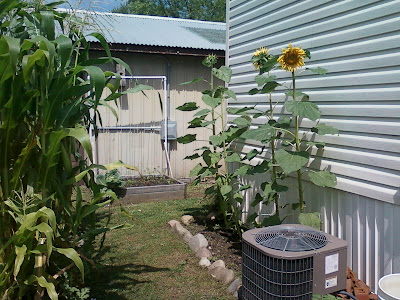 Okay, so most of them aren't drastic changes, but things are definitely changing around here.  Almost all my squash and pumpkin plants, including the mystery plants but not including the vertically growing silly pumpkins, have succumbed to an apparent squash vine borer infestation, dramatically changing the view.  I've also trimmed a lot of leaves off of the tomatoes at the end of the driveway, since they've had some sort of leaf spot, so I am hoping that by trimming off the affected areas would keep this fungal issue (not sure exactly what kind of leaf spot I'm dealing with, but I am confident that it is a fungus) in check, since the tomato plants are starting to produce such big red tomatoes that it would be a disaster if I were to lose them now. 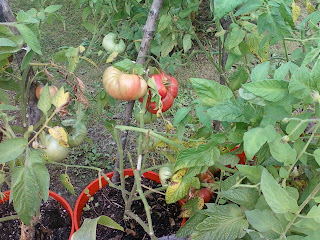 Now that I have been more or less told I don't have to get rid of my garden right now, I'm starting to consider how I can get enough stuff out of the way of the contractors so they can get to the garage and do their thing.  Ironic, huh?  Tell me I have to, and I fight it tooth and nail.  Tell me I don't have to, and I start to look at how to do just that.  A lot of the corn has already finished, so I'm pulling (or cutting, depending on how close it is to other plants whose roots may be disturbed) them out as they are no longer needed.  Once the corn is gone, that would just leave the beans on the left side of the yard (but that corn I'll have to leave for a bit longer to support the beans) and cucumbers and melons on the other side of the yard (I'd have to untangle the cucumber tendrils from the corn to pull it on that side, but that is doable).  The stuff in the raised beds and other beds with defined borders isn't in the way for the garage remodeling, so their is less of a rush on that, but the corn in there is coming out as we use it too and the sunflowers will be coming off as soon as they are done so we can eat the seeds rather than the birds getting them. 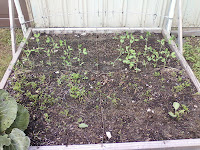 Not all the changes are negative, fortunately.  The sunflowers in the former "St. Patty's" bed are starting to bloom and carrot and snap peas have come up in the back raised bed.  Where the zucchini died, there are now more snap peas planted, so that space won't be vacant for long.  I may have pulled the last of the spring broccoli the other day, but now I have a bit of broccoli to make more of my favorite soup with and more space to plant spinach today.

Another positive change is I've been starting to rearrange things.  One of the nice things about having stuff in containers is I can rearrange them easier than I can rearrange furniture in the house!  The tomatoes that were looking sad on the patio area are perking right up in front of the house in the area I mentioned before looked kind of bare.  I may move things out of the end of the driveway soon too, to further open up that area to the contractors.