You Want Me to Get Rid of My Garden By WHEN?--an EMERGENCY Trailer Park Homestead update 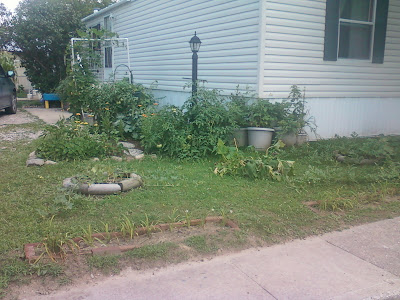 As my followers on Twitter and Facebook already know, I received a notice this morning to "please remove garden & restore grass area" by August 12.  Say what?  The notice cites "rule violations" of "written approval required", "area to have clean appearance", and "lawn - mow/trim/fertilize/water/rake".  Well, as long time followers of this blog know, I was told on May 31 that if I provided a drawing of what I had done on the property, she would consider that the written permission.   At that time, she told me the issues she had with my gardening were the buckets around the property that were being used as planters and she wanted the brick border on the side of the property inlaid into the ground.  I had the drawing to her within the hour and had the other things done by the weekend.

Now this.
When my husband called her, she said first that she didn't actually approve it, she just never got back to us telling us that.  She said some of the residents have inquired about the garden, but when my husband asked for clarification, if anyone had complained about it, she said no.  He asked if it was Sun Homes, the actual owners of the property, that had a problem and she said no, it was her. She just wasn't expecting to be so tall.   She said she "cringes" when she drives by "because it is not a normal yard" and that it is so tall.  He asked if she was familiar with the situation in Oak Park and suggested she look into what happened there when there was a similar situation.  She said to go ahead and disregard notice until Monday morning when she set up a time to have her and her supervisor come out nice and early to discuss the situation.

So this is all personal with her apparently.  No one else has a problem with it.  Ton of residents have complimented me on my great garden.  There is nothing in the lease that says I can't do what I've been doing.   Other residents have even grown corn in their yard (that was actually a factor when I was trying to decide whether to have corn in my yard!), which seems to be her primary issue, just theirs haven't gotten as high.

My husband's impression after talking to her that she really just wanted to talk about it, but the way she went about it, leaving a notice on the door saying we have to get rid of the garden by August 12 was certainly not the way to do it.

So here we are.  We have this meeting on Monday to "look forward to" (edited 8/8/11: the outcome of that meeting can be found here).  In the meantime, I'd like your help.  I'd like there to be no doubt in the property owners' minds that I have every right to have this garden.  Please go to the Sun Communities webpage and submit a comment letting them know that I was told before we ever signed a lease, which didn't forbid the garden, that it was okay to have an extensive garden here in Hamlin MHC in Webberville, MI.  I submitted the papers I was asked to and was never told they were denied.  Let her bosses know that it would be very wrong for them to deny our family all this good healthy food that we are depending on to feed our family.  Just remember to be nice, since at this point, we believe the owners will be on our side, it is just the site manager that has issues.  (Edited 8/8/11:  Please read the update before sending messages)

Oh, and she specifically said, when my husband commented on the possibility of media exposure, that "I don't want to be on the six o'clock news!", so let's help the lady out and get this resolved nicely over the weekend, shall we?  *wink*