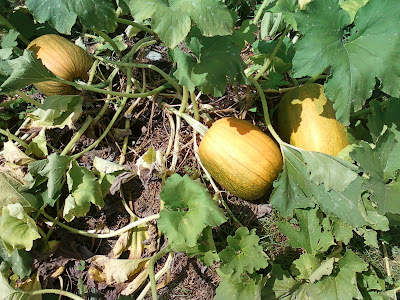 So it looks like the mystery plants are pumpkins!  Unfortunately, I didn't really need pumpkins since I already have pumpkins growing elsewhere, sometimes several feet in the air!  Also unfortunately, the one person that said pumpkins for the answer to the contest was an anonymous person that didn't leave any sort of contact info, so if you are that person, you'll need to email me your address to mail your prize (don't worry:  I can verify it is the correct person from ISP address).   My theory is that when we tossed the pumpkin goo from carving Jack-o-Lanterns last Halloween, the seeds laid in wait until spring.  When I used some of that compost to plant the tomatoes, the seeds sprouted and grew and grew!

Anyway, back to the silly pumpkins!

A final "unfortunately":  the former mystery plant pumpkins have been infested with ucky things, so it is a good thing I have the planned silly pumpkins!  The silly pumpkins so high in the air should be safe from bugs sneaking up out of the ground to eat them up.  Now, I'm off to pull the mystery plants and plant something I can actually use!