The Vampire Gardener Fries a Zucchini 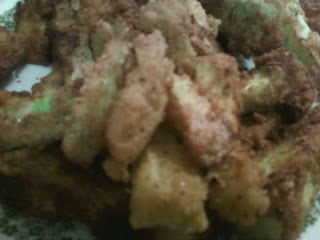 For those that haven't been following me on Facebook or Twitter, I've been referring to myself as a vampire gardener of late.  With this heat wave going on, it is too darn hot to garden during the day, so I've been waiting until after sunset to head out and getting as much done as I can of the watering, weeding, and harvesting before full dark.

During last night's vampire gardening, I harvested my first zucchini.  Yay!  I'd been watching that one for a while, waiting for it to get a bit bigger on one side, the blossom side before harvesting.  However, last night, much to my sorrow, I noticed that end seemed to have turned a bit yellow and started to rot instead of growing!  I picked it anyway, cut off the bad part and made myself fried zucchini.  Yay!  I know, I know.  It is slightly evil to bread and fry a perfectly good veggie, but I know you'll want to too, so the recipe is below.

Back to the sadnesses of the yellow and blossom end rot.  A itsy-bit of research indicated that the rot is probably due to a lack of calcium in the soil.  Fortunately, I've been hoarding egg shells for that specific purpose, so it looks like I'll be grinding them up today to add to the soil during tonight's vampire gardening session.  It could also be because of watering issues, but I'm going to play it safe (not as safe as if I had the soil tested, but I'm goofy like that) and add the egg shells, since I have them laying around anyway.  Some of the same places (random pages on the internet.  I just googled it) said that the yellowing could be caused by a nitrogen deficiency in the soil and that a treatment for that is to add manure.  I happen to have a bag of composted cow manure in my garage, so I think I'll be mixing the egg shells into that and spreading it around the base of my plants with an apology for mistreating them so.

And now for the fried zucchini recipe.  This goes great with marinara sauce or ranch dressing.  Don't worry, people that aren't fans of fried vegetables--this is only the first of many zucchini recipes to come!