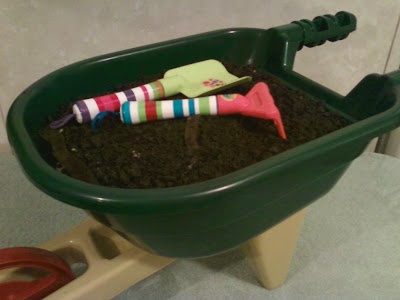 Okay, this is not my cheapest idea ever, but it still probably way cheaper than buying a cake already made...and probably way cuter and more appreciated by the birthday boy!  I made my 2 year old a dirt cake for his birthday party today.  I used some of the gummy worms I made the other day and put it in a toy wheelbarrow that is actually his gift as well, as are the toy rake and the shovel that are being used for decoration and will be used to serve it.  So I guess if you include the price of a centerpiece, gift, and cake, all of which this cake is for this occasion, the price isn't bad for a "cake" that should (in theory) have about 16 servings to it!  I put the cake in quotes since it is more of a pudding-y dessert, but it is still called a cake and it is serving the role of birthday cake.

This is such the perfect cake for my tiny little man too, since he loves to "help" me do things with the wheelbarrow and loves sticking his hands in the dirt, enough so that I need to replant some rutabaga soon, since he's killed a number of them with his love of dirt!  He loves it when I find worms in the ground for him to visit with, so I'm sure he'll love finding "worms" in the cake to eat.  Plus, lately, he's had a thing for shovels where he'll hoist it up in the air whenever he finds one and triumphantly yells "shovel!"  He even took a play shovel to bed with him a couple nights ago.

He hasn't seen this yet, since I made it last night after he went to bed and stuck it in the chest freezer until it is time to go to his party at a park, but I know he's going to love it!

4 cups milk
16 oz Cool Whip, thawed
gummy worms (optional)
Make pudding according to package directions (amount of milk may vary depending on brand used.  I listed the amount I used for the Dr. Oetker pudding

I used, the only kind of commercial pudding I can ever find without artificial colors!).  If using cooked pudding, let it cool completely, stirring occasionally to keep a film from forming on top.

Crush the cookies using a rolling pin or children smashing them in plastic bags.

In a flower pot, sand bucket, or wheelbarrow, layer some cookie crumbs then pudding mixture then cookies and so on.  Layer worms throughout if desired.  Finish with a layer of cookie crumbs to resemble dirt.

Chill for at least an hour before serving.  May also be frozen.