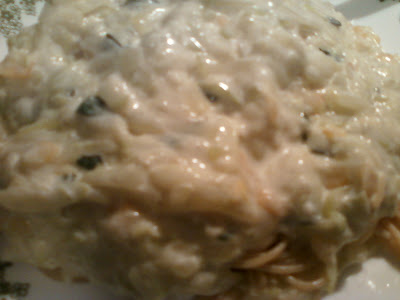 This probably could be made with less milk to make a creamed zucchini side dish, and I'm actually thinking about baking the leftovers as a casserole type thing to serve as a side dish with chicken in a couple days, but, as is, goes great over pasta!  Yay for another way to use the zucchini that magically appear on people's doorsteps and inside unlocked cars this time of year!  I just came up with this recipe, but, based on similar recipes, I bet it would freeze well for those nights that you don't want to have to or don't have time to cook or it could be frozen in individual portions to take to work for lunches.

A word of warning:  fresh basil is necessary for this recipe, so don't try to throw in some dried and complain it doesn't taste good!  Pesto might work if no fresh is available, but I don't know for sure.

When I made this last night, I used zucchini from a friend's garden (thanks, Lee R.) and carrots, onion, and basil from mine, so the whole meal, including the whole wheat angel hair pasta I served it on, cost less than $4 to feed the family!  Plus, as I mentioned, there was a fair amount leftover, since we found it to be quite filling, so I'll probably serve that as a side in a couple days (or freeze it for even longer?), so really what we ate tonight was probably about $2-2.50 worth of food!

Heat the oil in a large skillet over medium heat.  Saute onion and garlic for about 5 minutes.  Mix in zucchini and carrots;  cook about 10 to 15 minutes, stirring frequently, until most of the moisture has boiled off.   Add milk and stir in cream cheese until melted.  Stir in basil, lemon juice, cayenne, salt, pepper, and Parmesan.