I am sore.  It could be from all the hardcore gardening I did yesterday.  I pulled almost all of the broccoli and planted some scallions (I think that's what they actually are.  I always call them clump onions because I forget what they are really called and they grow in clumps and I used them like onions) and carrots, as well as moving some of the basil sprouting up under the lilac tree and rearranging the baby sunflowers under the dryer vent so it doesn't look so much like a two year old planted them (even though one did). 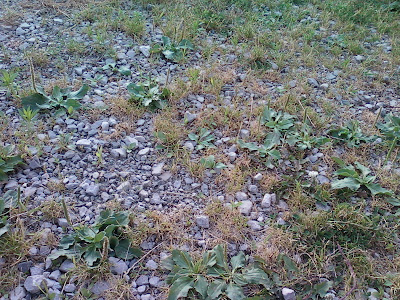 I'm pretty sure that it was the driveway that did me in though.  I really hate spending time, energy, and/or money on things that don't matter, like the appearance of the driveway (it's just a place to set a car when it isn't in use, for goodness sake!), but the latest newsletter from the trailer park indicated that they would like the driveways to be weed free and it did look pretty incredibly crappy in places, so I figured I should probably do something about it before someone complained and management either fined me or came over to "discuss it", in which case I'd be opening myself up for possible issues with the "over the top" garden as well.

I'd been kind of meaning to do something about the weeds in the driveway for a while, but it was one of those things that I wasn't sure what the best way to proceed, so I was procrastinating by waiting until I got a chance to research it.  I knew I didn't want to pour expensive toxic chemicals on it since A) we drink groundwater here so I didn't want to pollute our water, B) the kids play there, C) too expensive, and D) too close to the garden.  The other options I knew about were pulling them out by hand or pouring boiling water on them.  I didn't want to have to boil and haul that much water out, since you can see from the picture that it was getting quite bad in places, so I decided last night to start ripping them out by hand.  It wasn't difficult as far as weeding goes, since most everything had a really shallow root system, so they came out really easily, but all that bending and reaching and repetitive movement with my arms did a number on me!

And I didn't even get it all done before it got dark (I started around 8:30pm, so I'm not really surprised)!  As sore as I am, I decided maybe I don't want to do the rest of it by hand, and still don't want to boil that much water, so here are some of the other options I'm now considering for the remainder of the driveway and for follow-up maintenance:
So those are the options I'm looking at.  I don't think I have a spray bottle around right now other than the one holding my homemade mosquito spray, so I think I'll finish dealing with what I have in the driveway by hand, maybe pouring boiling water over just the weeds in the cracks in the sidewalk.  After that, I think maybe I'll spring for another spray bottle at the dollar store next time I'm in town so I can try some of these other ideas, probably using a vinegar/soap/water(/salt?) solution.

Have you used natural herbicides before?  If so, what and how did it work out?