The seasonings I made for this project, BBQ, pizza, chocolaty, cinnamon, and ranch could be used for flavoring other things too, like popcorn or other seeds, so even if you don't have any pumpkin seeds around, you may want to take note. 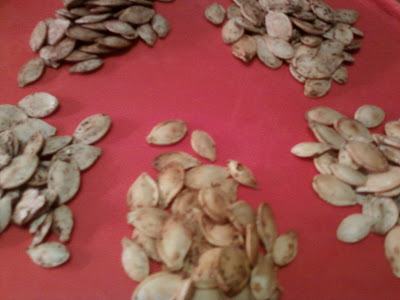 I finally got around to doing something with our pumpkin seeds left over from jack-o-lanterns yesterday!  I knew it would take a while before I got around to them, so I stuck the pumpkin guts, including seeds, in the fridge after my husband and kids carved their pumpkins Monday.  Tuesday, I cleaned the seeds off and discarded the pumpkin guts.  I have read that pumpkin seeds can have an enzyme in them that can upset stomachs if too many are eaten (and knowing I have a tendency to overeat yummy things), but that enzyme can be neutralized if the seeds are soaked in salt water for 8-48 hours.  I figured this would also give me some extra time before I had to deal with them, so that was an added bonus.

Yesterday, my 48 hours was up.  I needed to do something with them.  I rinsed off the seeds, patted them dry with a towel, and mixed up my seasoning blends.  Then, I tossed a bit of olive oil and a bit of seasonings (I found more is better.  Too much won't stick and if there isn't enough, the seed dominates enough that you can barely taste the seasoning), and baked at 350 degrees, checking for done-ness and mixing up about every ten minutes.  When they were toasty enough, I pulled them out and ate.  I liked all the flavors I made, my kids just liked the cinnamon and chocolaty ones, and my husband thought the seasoning was fine, but didn't like the seed flavor, so there wasn't anything to be done for that, other than stop wasting them on him!

I wrote these blends using "parts" as the units because I found that to be a very useful way to measure seasonings.  That way, you can use the same recipe for a tiny, single serving or an industrial size batch for a huge party or long time use.  Just use a tiny scoop or 1/8 tsp or something for a small batch and a bucket for the big one.  It really doesn't matter as long as you keep the proportions the same.