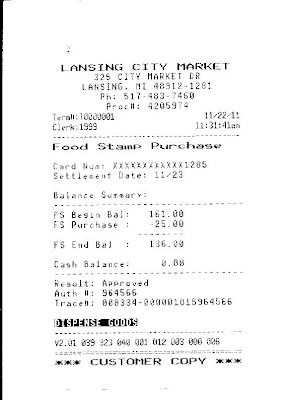 When discussing living on extremely limited funds for food, one of the things that frequently mentioned is buying bulk.  Well, here's the scary reality of buying bulk:  when you do, like when I bought 10 pounds of cheese the other day, that money is no longer available for anything else.  We don't get more food stamp money until December 21 and we are already down to $61.44 to last us until then.   The good news is that I think, for the most part, we are set on groceries for quite a while.

Here's what I spent that nearly $100 on and what we've gotten on WIC since I started keeping track for you on November 21:

The first receipt is for $25 in tokens at a farmers market.  I had one token worth $1 left from the previous month and used those $26 in tokens to get a quart of real, local maple syrup and a 2 pound jar of local honey.  Both of those should last quite a while.

The first batch of groceries was actually purchased by my husband based on a list I gave him, so I couldn't adjust in store for sales, etc.  Living out in the boonies like we do, that's just what has to happen sometimes.  On that trip, I had him pick up 2 bags of frozen onions (because I was going to be making meatballs for the freezer and couldn't realistically cut that many onions without having eye issues), ketchup, ice cream, tortilla chips, and I told him to get 1 case of Diet Coke for me, 2 if they were on sale, which they were.  Some would judge very harshly that I was buying pop on food stamps, but A) I gotta drink something and as much as I need to accomplish each day to keep us fed and do everything else that needs doing, something caffeinated helps and B) here in Michigan, we have a 10 cent deposit on pop (or soda as it is called some places) cans, so when I return those cans, we can buy luxury items that we otherwise couldn't afford...like toilet paper.

That same trip, I had him pick up some items on WIC.  Most stores require that WIC be a separate transaction from any other form of payment, so it is on a different receipt.  I had hom pick up some milk that I want to try to make sweetened condensed milk from to save on that, whole wheat tortillas, milk for drinking, bread (I knew I wasn't going to have a chance to make any with the holiday weekend coming up), fresh cranberries (to complement the leftovers I knew I'd have with the holiday weekend coming up), and 1/2 pound of cheddar cheese to last us until I could make it to the restaurant supply store to get a quantity of cheese that would last more than a day or two.

This week, I actually got to go shopping.  Yay!  The cashier was pretty appalled when I told her this was pretty much my groceries for the week and not just some holiday baking supplies!  I got some cheap salt (for crafts, actually), chili powder, white whole wheat flour, flaked coconut, sugar, and chocolate chips.  Yeah, I can see why someone would think that was for some fun holiday baking!  The flour is primarily for real food, like bread, crackers, and maybe some bagels.

On that same trip, on WIC, we got some eggs, some Honey Kix that the kids like to snack on, milk for the whole family to drink, and some white grape juice for the kids. 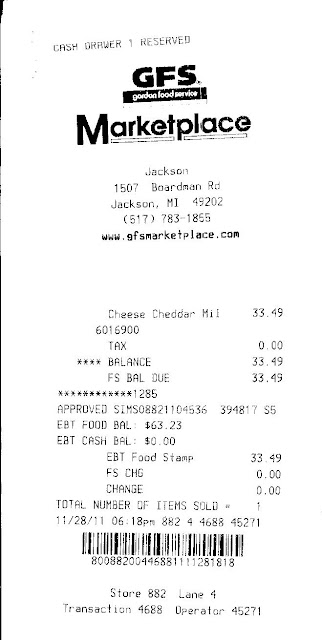 Finally, before we left civilization to head back to BFE, we stopped off at a restaurant supply store to pick up some cheese.  I had been planning to get a couple 2 pound blocks, but the price went back down on the 10 pound blocks so that it was a lot cheaper in the long haul to buy it that way. 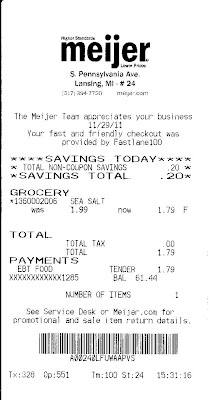 When I was mixing up some no-knead bread dough later that night, I was shocked to discover we were darn near out of sea salt!  Fortunately, my husband had some business to attend to near stores that would actually carry sea salt, so he picked up some.

So, as you can see from the last receipt, we now only have $61.44 to last us until 12/21, barring our caseworker actually doing something.  This may not seem like much, but we already have the vast majority of groceries we need for the month, so only having $14 to spend next week to get us back where we should be when you figure we have $38 a week to budget, really isn't that huge of a deal.


--------------------------
Yesterday was another super cheap eating day.  The morning rains urged the kids and I to sleep in, so by the time we woke up, brunch seemed more appropriate than breakfast (my husband wasn't home, but he grabbed a couple cookies to snack on while visiting his mom and didn't get to have a meal, our leftovers from brunch, until much, much later).  We enjoyed whole wheat pancakes with maple syrup and venison sausage for our meal and the kids snacked on more pancakes in the afternoon as well.  My husband brought home some tangerines (or mini-oranges or some sort of mysterious round orange citrus fruit) his mother sent back with him and the kids gobbled them up for snacks in the afternoon as well.  They also had a little cheese while waiting for dinner to be ready.  Dinner was turkeyherder's pie, to use the last of the mashed potatoes from Friday's Thanksgiving dinner, the last of the turkey that hadn't been frozen, and the last of the gravy we brought back from Friday's dinner.   I also polished off the last of the cranberries I'd cooked up to go with the leftovers (since I was the only one that really liked them) as a side with my dinner.  The veggies in the pie were all from my garden or my mom's so they were free as well.  The only part of dinner that actually cost any food stamp dollars were the approximately 1 or 2 ounces of cheese I put on top of it!  I also had a late night snack of tortilla chips with homemade apple-tomato salsa.  I'm not sure exactly when or which kids did it, but I have also discovered evidence (lid and can opener on table, jar in the sink) that certain children also helped themselves to, and devoured, a 1/2 pint jar of homemade applesauce.

As far as beverages go, my husband only drank water, either from the tap or bottled water his mom had given him, I had 3 cans of Diet Coke, 2 of the kids had juice with dinner, the other kid and I had milk with dinner, and 2 of the kids had a little milk at bedtime.  Anyone that was thirsty the rest of the day had tap water (and I don't know who or when, because I was only guarding the refrigerator to see what came out of it, not the sinks).