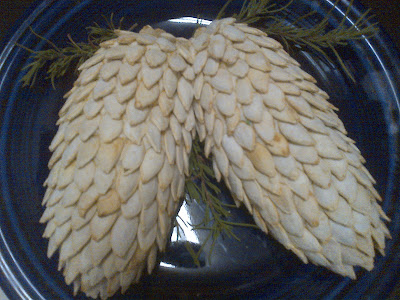 The other day, I saw an adorable pine cone nut ball picture floating around Facebook.  I absolutely loved the idea and couldn't wait to make one, but there was one problem: the decorations to make it look like a pine cone were almonds and the first opportunity I had to make one was a nut-free event.

I wish I could say that they were leftover from our Halloween jack-o-lanterns, since that would have been the thrifty thing to do, but I was so crazy busy during Halloween season that I gave our pumpkin seeds to our neighbor (who did roast and eat them).  I can take credit for the rosemary used to look like pine needles, since that is from the pots on my kitchen windowsill.

With leftover pumpkin seeds, herbs and onion from the garden, and couponing and shopping sales for the cheeses, this could easily cost under $5, which is pretty thrifty for a dish to share at a gathering of some sort, like the homeschool party I took it to today.  And, boy, did it get rave reviews!  People thought it was super cute and super yummy!

I'm sure it could be done with any cheeseball recipe, but here is the one I used:

Place cheeses, onion, Worchestershire sauce, and parsley in a large mixing bowl.  Blend together with an electric mixer until well mixed and fluffy.  Cover and refrigerate at least 2 hours.  Shape into two large tapered oblong shapes and place on serving plate.  Starting at the small end, stick pumpkin seeds into cheese mixture with pointed ends out to resemble pine cone scales.  Work toward the other end of the cone, overlapping the rows of pumpkin seed scales.  Use rosemary sprigs as garnish to resemble pine needles. 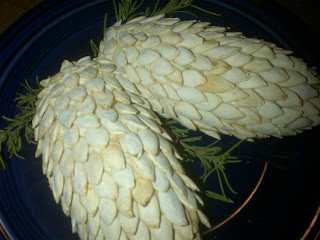