My husband works at at big box store.  He told me that today it was so crazy busy in there, there were only three shopping carts not in use in the whole place!  And it is expected to be even worse the next couple days.

I'm so glad I don't have to go out in that mess!

I do still have two more presents I need, but they are both homemade and I have everything I need to make them.  When most people think of homemade presents, they usually think it would be a good idea to start them months ahead so you don't have so much to at the last minute.  While that might be a good idea in theory, and even necessary for some presents, for some of us, with our super busy schedules, it just isn't possible.

Which leaves us with just a couple days until Christmas with more presents still to be made.

For those in the same boat as me, or worse, since maybe you don't even know what you are going to do, here are a few gift ideas that it isn't too late to make.

These are really easy to make, cute as heck, and cheap.  I made these ones last year from cups and such I found at a thrifty store.  More on how to make them can be found here. 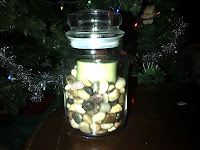 Melting and pouring sound too dangerous or like too much work?  Here's an even simpler idea.  Decorate a store bought candle (like from a dollar store).  With this one, I used an empty Yankee Candle jar that my mother-in-law gave me (she knows I can always find good uses for jars of any kind), poured some decorative stones in it, placed the candle in it, and carefully pour some more stones in it.  Total cost: $2 for a gift that took two minutes to make and looks like it costs a lot more! 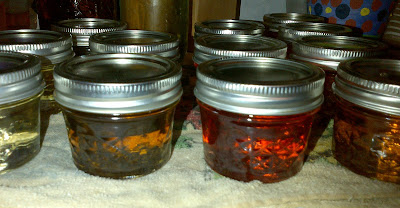 I made these this year for my mother-in-law, sister-in-law, and a few friends.  I love these from the standpoint of uniqueness, it isn't something you can just walk into the store and buy.  I was able to make a lot of gifts in just a couple hours with these! (recipe can be found here) 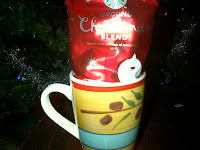 Okay, this on is bordering on the not-so-homemade, but since some assembly is required, I'm going to include it.  The concept is simple: get together some items that the recipient would like (you can even use stuff from the dollar store!) and put it in a container.  Here is a "gift basket" at its simplest:  a coffee up with a bag of fancy coffee in it.  I'll wrap it up really nicely and it will look even fancier than it is!  Another similar one (that uses an actual basket) would be a mug, some tea or hot chocolate, and a throw blanket for a cozy gift for a cold winter.

Some of the favorite gifts I've given or received have been as simple as baked goods.  I still remember one year more than a decade ago when I gave my brother one of those large popcorn tins (that I probably found free somewhere) filled with his favorite cookies.  His eyes lit up when he saw his bounty!  I put them in gallon baggies so they could be frozen and enjoyed over several months.

Don't have time to do that much baking in the next couple days?  Just give a dozen or so and include "coupons" for a batch a month or something, so they can enjoy their treats all year long and take some of the pressure off yourself at the same time. 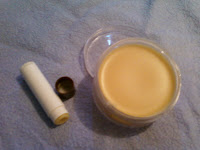 Again, this doesn't have to be anything fancy or hard.  My lip balm recipe is pretty easy and simple and there are almost always free ebooks on Amazon filled with recipes and directions for other things, like today's free ebook, DIY Herbal Spa: Learn how to make organic aromatherapy bath products at home

.  This also would be a great idea for a more-homemade-than-above gift basket.

There are lots of other things you can make at the last minute to the point that this post could get ridiculously long if I tried to list everything I can think of, so I'll limit myself to things I've actually done and then point you to my Pinterest boards.  I have one specifically for upcycled gifts for adults and one for homemade gifts for kids, both of which have lots of great ideas and to which I'm always adding more things as I find them, but there are also great gift ideas in some of my other boards, including something I'm making for my mom for Christmas, but she actually reads my blog sometimes, so I can't say what!