Getting Cultured--Making my own yogurt

My kids love yogurt.  So much so that I can easily spend $10 or more on yogurt that will only last a day or two if I don't guard the refrigerator like a dragon watching over its hoard of gold.  Obviously, when I try to spend about $30 a week for groceries, having a third of that disappear in a couple days just from that one source isn't okay.  Hence, I've been working on getting around this by trying to make my own yogurt.  I don't like to waste anything, so I've been only trying this with milk that was going to go bad if desperate measures weren't taken, so I wasn't out anything if it didn't succeed.  And not all attempts have succeeded.

In one case, the yogurt came out fine, but the kids didn't like taste of it.  In another case, I didn't have the incubating temperature quite right, so it didn't set right.  In yet another case, it was technically fine, but the texture wasn't like that of store bought yogurt, so the kids didn't go for it.  Over the past couple days, I've been playing with a gallon of milk that expired over a week ago, but still smelled fine, and I finally came up with something that the kids like!

Sterilize anything that will be used in this process.  Heat the milk in a saucepan to 180 degrees, stirring occasionally to prevent scalding.  While it is heating stir in the honey.  Once the honey has dissolved completely, stir in the gelatin.  Allow the milk mixture to cool back down to 108-112 degrees.  Stir in the yogurt cultures.  Pour into lidded containers for incubation and allow to incubate undisturbed (moving, shaking, or stirring it during this time could prevent it from setting right) for 5-12 hours, depending on how thick and how tart you'd like it to be.  I have found the best success letting it incubate for 7-8 hours.

I have tried a number of incubation methods and all of them seem to work as long as you maintain the yogurt at a temperature of 100 degrees.  If it gets too hot or cold, it won't work.  There are other incubation methods that I've read about and haven't tried (even using a yogurt maker.  Gasp!), but these are the ones that I've gotten to work: 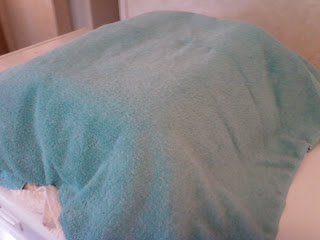 Any way you do it, you end up with a rich, creamy, delicious and very cheap yogurt that you can customize into any flavor you want by adding fruit or preserves or anything else that strikes your fancy!


* edited to add:  I was asked on Facebook if there was a vegetarian alternative to the gelatin, so I figured I should post it here too.  I have not tried this, but my references say that you can use 1/3 cup instant nonfat dry milk instead.