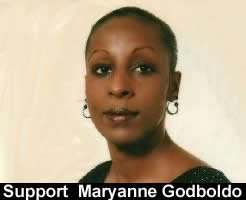 A very important thing I do for my family to keep us all safe and healthy, as well as saving a ton of money on medical costs, is staying the heck away from doctors.  It's true.  We almost never get sick and, when we do, we take care of it ourselves.  I attribute our health largely to lifestyle, but in the case of the children, I think it also has to do with choosing not to vaccinate, since vaccines actually damage the immune system.  Living in Michigan, we are well within the law to do so, even if I were to want to send the children to school.  (I don't want to get into all the reasons that, after educating myself and my husband on the issues, we made this decision, so if you want more information, I highly recommend my friend's blog, The Daily Guggie Daly, where she frequently discusses these issues and shares a lot of informative links.)

This is a large part of why this case has me so incensed.  This mother was just trying to keep the government from stepping in and telling her she had to drug her daughter and it escalated to a standoff with police and her being arrested!  For trying to protect her daughter!  And this kind of thing isn't that isolated either, even though I'm sure it doesn't get this out of hand that often.  Here is another very recent case of a baby being taken from her parents because some meddling person on a power trip decided that they had more of a right to say what happened to the child than the parents did.

I'm actually shaking right now, I'm so upset about these attacks on parental rights.  I've actually experienced CPS's meddling in my parental rights first hand, but I kissed their butts and told them what I wanted to hear in both cases (yes, this happened twice) and made it go away before things got out of hand.  Obviously, not everyone is so fortunate to have it work out so well.

The first instance was after my second son was born.  He was born at home and we had a beautiful unassisted childbirth.  He was a bit premature, but was fine.  He did develop a little jaundice, which isn't at all uncommon, especially in premature boys, but it was mild and nothing to really worry about.  I was treating him by breastfeeding and exposing him to sunlight as much as the winter sky would allow and although it wasn't clearing immediately up, it wasn't getting worse either and it was just a matter of time before it cleared all the way up.  Someone disagreed though, never proven who (although I have my suspicions), and reported me to CPS for medically neglecting my son.  I was completely shocked when a caseworker came to my door about it!  I played along though, and took him to a pediatrician they recommended, since I didn't have a regular pediatrician for him.  When the doctor prescribed him to be under a biliblanket for a certain amount of time each day at home, I didn't argue, just got the biliblanket and only used it when my mother-in-law was looking (like I said, I have my suspicions--if it wasn't her, it was someone she told about the situation).  I knew enough about jaundice, having done my own research to realize that the levels of bilirubin in his system were no where near a level to be concerned about, but was concerned he would become dehydrated if left under the lights like directed.  The jaundice went away in a timely fashion, despite my hardly using the "needed" biliblanket and the case was closed.

After my last baby was born, we had another situation.  The baby had some fairly severe jaundice (his doctor and I think he was actually up to 7 weeks premature, even though the ultrasound said he was due right about when he was born) before even leaving the hospital, so I was actually discharged from the hospital several days before he was, but I stayed with him in the hospital even after I was discharged to feed and take care of him.  Basically, I let him stay for observation.  Eventually, he was "allowed" to go home, pending daily bili-checks to make sure his bilirubin levels were going down.  During these bili-checks, it was noticed that not only were his bili levels not going down, but his weight was!  The hospital wanted to readmit him, this time to the NICU, which wouldn't let me stay with him.  As his sole source of food, obviously this wasn't an option.  We declined to admit him and worked out a plan with the hospital's lactation consultant to get his weight back on track.  I was to let him nurse, then pump milk while he drank from a bottle from the previous pumping session to make sure he was drinking enough, since the problem seemed to stem from him being a "lazy sucker" that would just take a couple sucks from the breast then fall asleep, denying himself the nourishment he needed.  This plan was working and he gained 4 ounces for each of the next two days!  On that second day, a CPS worker showed up to my door to make sure I wasn't starving him to death since I'd taken him from the hospital AMA.  In this case, I had the subsequent documentation from both the hospital and doctor's office showing his weight gain, so I just told the caseworker where she could find the relevant proof that he was doing well, and she went away, never to be seen again.
In either of these cases, if I'd reacted differently, I might have lost the kids.  I know this.  I sometimes still have nightmares about it, but I know I did the right things for my kids, just like I know I'm doing the right thing if they get the sniffles and I don't give them any medications to reduce the fever or I don't rush them off to get antibiotics at the first sign of a possible ear infection.  All these things, as well as the myriad of other situations where I use natural treatments instead of pharmaceuticals, save us a ton of money as well as being healthier (which is why it is relevant to this blog, in case you were wondering what the connection is).  Drugs, and pharmaceuticals are simply another class of drugs, are not something my family needs and we reap health and monetary benefits from staying clear of them.  Cases like I mentioned make me fear that this freedom to keep my children clear of drugs is becoming more and more threatened--and that makes me sick.

If you want to take action, to help Maryanne Godboldo, and protect all parents' rights to raise their own children, if you click on the picture of her above, it will take you to her support webpage, where you can find out about upcoming events to help her out, donate in support, or find out more information about the case as new developments unfold.