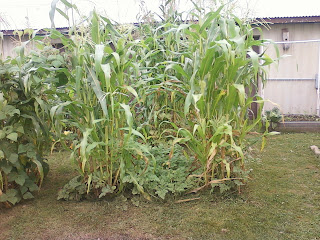 We just met with the trailer park manager and her supervisor as planned.  Basically, they came out, took some pictures, and said they were going to leave the final decision to their higher-ups (bet ya have an idea where I'm going with this already, don't ya).  The manager's supervisor said that his feeling on it was they were just going to go with it for this year and then ask for guidelines from the higher level people for future years.  They also mentioned the possibility of asking me to run a community garden in the trailer park (toward the back, of course) next year.  Basically, they admitted to never having seen anything like this before, so they weren't sure what to do about it!

So here's what you can do:  contact Sun Communities management on their contact form and let them know how important growing one's own food can be and that they should offer full support to anyone that wants to, whether it be on their own lot or in a community garden or both.  Remind them that lawns are costly to maintain and pointless, or talk about how edible landscaping is a growing trend and just as beautiful, if not more so, than purely decorative plantings.  The purpose would be to educate, not alienate, so definitely keep these messages extremely positive.