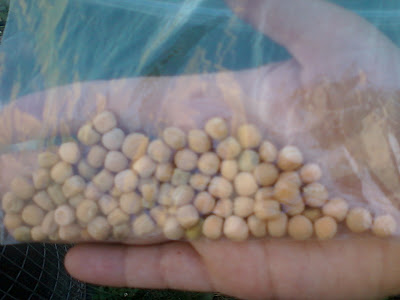 Even in the midst of the canning and preserving frenzy that is the prime harvest season of early fall, my thoughts are turning to next year's garden.  As I clean out the remnants of this year's garden, I am thinking ahead to what I might want to do differently next year.  As I put up my garden's fruits, I'm also putting up seeds for next year.

The longer I garden, the more excited I get about heirloom seeds.  It is a beautiful thing to realize that as I obtain more heirlooms, I have to buy fewer seeds in future years if I just think ahead a little bit and save some of what I have for next year.  Unlike hybrids, which may not breed true to produce the same exact plant next year, heirlooms will produce the same variety as the parent plant, so investing in heirloom seeds gives you a lifetime supply of food of that type with just a little care.  If your descendants are into gardening, you can actually feed them for their lifetimes as well by giving them some of your precious heirloom seeds.

Last year, the only heirlooms I had were some nameless snap beans that a friend's ancestors had brought over from Italy (I call them magic beans because they have such cool origins and they are purple and green on the vine but turn green when you cook them), some Ace 55 tomatoes that I bought at a store, and some moon and stars watermelon that a friend had given me.  I didn't bother saving the tomato seeds, since it is a messy, smelly, involved process and I didn't really need to since I still had so much of the seed packet left.  I did save some bean seeds and watermelon seeds though, and this year's beans and watermelons are offspring of last year's harvest.

This year, I have many more heirlooms including more Ace 55 tomatoes (left over from last year's seed packet), Brandywine

I'm not sure if I will be saving the tomato seeds since it is kind of an icky, pain-in-the-hind-end process, from what I understand, plus I have to look into whether I actually can or if the varieties of tomatoes I have cross-pollinate.  I know I won't save any blue jade corn, because it didn't work out well for me so it isn't worth the bother.  Technically, I can't save the green dent corn because it was grown in such close proximity to other varieties of corn, but I may anyway, just not claim that it is pure of that strain, since there is no way for me to know for sure if there was cross pollination.  The zucchini I won't be saving seeds from since the squash vine borers killed my plants before I was even starting to think about seed saving, but I still have quite a few seeds left in the packet I bought this year to save for next.  I do know that I can save the watermelon, ground cherries, beans, and peas though and save them I will.

The peas and beans are super easy to save.  I just needed to make sure no other varieties were planted too close so they'd cross pollinate, then let them fully mature, and dry out on the vine.  The first part is easy, since I only had one variety of each growing on my lot and I can be pretty darn confident that no one else in the trailer park was growing either.  The second part is a teensy more difficult since A) I have to make sure the kids don't eat them all, leaving none for seeds and B) you don't want to let them mature like that too soon or the plant will think its job is done and it will die, so it needs to happen toward the end of the season.  Once they are completely dried out, peel open the leathery pod and pull out the seeds.

The watermelon (and other melons, but I've never saved seeds from other melons) is a tiny bit more difficult, but not much.  When the kids and the husband eat a watermelon (not me, since I don't actually like watermelon), they need to make sure as many seeds as possible end up in a bowl or other container, rather than swallowing them or spitting them all over the yard.  Once they are collected, they need to be washed off and left out on a paper towel to dry completely before being stored away.  When saving watermelon, it is important that no other varieties were grown within about a 1/2 mile, but, again, I'm confident that no one else in the trailer park was growing watermelon this year, so it isn't something I was worried about for my seeds.

Ground cherries kick it up another notch on the difficulty scale, from what I understand.  I haven't actually done it yet, but I plan to this week, but from what I understand, you stick some ground cherries in a blender with a bit of water and blend.  The pulp will float up and the good seeds will sink down.  Then, you just wash them off and dry completely on a paper towel before storing away for the winter.