Discovering my seeds were moldy when going to plant some lettuce in the house the other day prompted me to finally (by many people's standards) figure out my garden for the year.  I decided, since it is such a depressing topic to think about right now, not consider the driveway as a place to grow anything.  I will instead focus on the rest of the lot, do what I can with it, and maybe if I can scrounge up the resources to do something with it, add the driveway as a container garden area later.

When looking over what I wanted to plant this year, I discovered that the loss of the driveway area as planting ground wasn't as bad as I first thought.  I decided not to do corn this year (unless I can find some free blue jade corn seeds somewhere) since I've never had much luck growing full sized corn in containers.  I also decided not to grow sunflowers, since we haven't been eating very many of the seeds like I thought we would.  I also decided not to grow pumpkins, since I'm unlikely to be able to grow anything as big as my husband and the kids would like to carve and I'm hoping we'll be moving before Halloween anyway (anything that won't be done by the time our lease is up will be grown in containers).  With the ground behind the house already torn up from the tree that was back there and everything else they were doing back there, it would make sense to use that as ground for planting this year as well.  As such, I decided I have room to plant a few potatoes (maybe experiment with sweet potatoes?) in containers, have a watermelon patch behind the house, grow peppers (bell and jalapeno), and grow spinach, carrots, onions, rutabaga, beets, and tomatoes in "official" garden areas, the beds along side the house and my garden box. 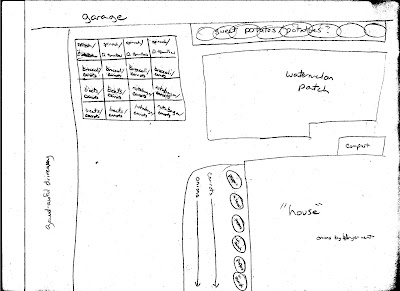 In the front yard, I'll be growing spinach, snap peas, more tomatoes, broccoli, cauliflower, cabbage, carrots, various herbs (I haven't decided what all will be grown for herbs, but I have an area in mind to dedicate toward them!), cucumbers, more watermelon, beets, onions, rutabaga, lettuce, cantaloupe, blueberries, raspberries, and zucchini. 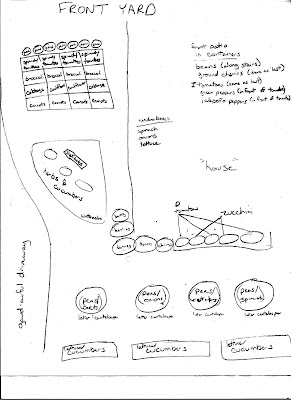 In my patio area, not diagrammed because there is no point (most things will be going where they were last year), I'll be growing my pole beans in containers up the stair rails (both front and back doors), ground cherries, tomatoes, green peppers, and jalapeno peppers.  I decided to put the peppers in a row right in front of where the tomatoes were on the patio last year, since peppers like heat better than tomatoes, so they will absorb more of the radiant heat from the patio and let the tomatoes be happier.

So that brings me to what seeds I need, since like I said, a lot of my seeds went moldy, despite being in a sealed container in the fridge with desiccant packets.  Not all those seeds will need to be replaced, like the corn, and I'll be growing some things I haven't grown before this year, like beets and jalapenos.  That brings me to my seed needs.  I'm looking for heirlooms only of tomatoes (both determinate and indeterminate varieties), peppers, winter squash, cucumbers, and cantaloupe, since I know I'm going to be able to and want to save the seeds on those.  I'm also looking for carrots, beets, spinach, cabbage, cauliflower (another thing I've never grown), onions, since I doubt I'll have an opportunity to save seeds from those this year.  Where I won't be doing a fall garden, I want to get as much food out of the spring planting of the annual veggies there and some things on that list, like carrots don't produce seeds until their second year and I'm not planning on being here next year if possible.

Anyone have some seeds for me?  I can offer trades of Aunt Molly's ground cherries and Rostov sunflowers, maybe even some stars and moon watermelons (but not too many of those), since those were spared the great mold incident, since they were kept in sealed plastic bags (something I'll be doing for all my seeds in the future!).  I'm generally not too picky about varieties, except where I noted I'm looking for heirlooms, but whatever I get needs to work for zone 5b.