So far, my year of decluttering is not starting off with a bang, but with a whimper.  Like so many things though, if you do it with other people it works better.  Get your mind out of the gutter, folks.  I'm talking about things like support groups or blog challenges.  In this case, specifically The Single Saver's Declutter Challenge. 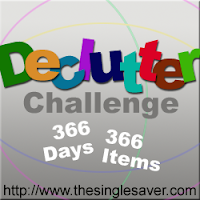 According to this challenge, stuff doesn't count as gone until it is actually gone, so the pile of clothes I have to pass on to St. Vinny's and the items I have posted on Listia to get rid of are still here until they are physically gone.  I'm planning on logging what I actually get rid of (which, if you regularly follow my blog, you know I want to get rid of a lot to make room for my year's supply of food storage) on the blog.  Sadly, since I haven't actually gotten rid of anything yet, I'm going to just list what I am getting rid of as "pending":

1) box of clothes (I'm going to count it as a unit, rather than the individual pieces of clothing, since they were already in the box at the time I decided to start the challenge.

2) pair of size 10 girls tap shoes, available on Listia until Sunday, January 15: my daughter just used them for a 6 week class and now she's outgrown them.  Since she's my only daughter, there is no need to hang onto them!

3) unpadded ring sling: my 2 year old isn't much one for being worn anymore and even when he does want to be in a carrier, this isn't the one I use anymore.  It was my favorite to use when the babies were really little though, so I hope it finds a good home, since we aren't planning on having any more kids.  Also available on Listia until Sunday, January 15.