Someone left this comment in response to yesterday's post on my Facebook page: "Did you (adventures of a thrifty momma) write this blog? I dont see how its "thrifty" when you purchase it thru WIC." (cut and pasted directly from the Facebook page) Excuse me?  How is only spending $3.50 for dinners for nearly a week, the cost of a gallon of milk (on sale) and a head of lettuce at the grocery store I shop at, for a family of 5 not thrifty?  I'm not including Sunday's vegetable lasagna in there, because I have no idea how much that will cost, since it has been so long since I've made it, but I'm sure it is a hell of a lot cheaper than a Stouffer's vegetable lasagna ($12-13 for Stouffer's as opposed to maybe $5-6 for homemade?)In all fairness though, I am using things acquired at previous times to feed people during the week, so let's look at exactly how thrifty those meals are by looking at how much they cost and how I did it so cheaply.

Monday was a leftover night, so essentially free, since those would have been budgeted into the meals they originally came from and most people probably would have let them go to waste. 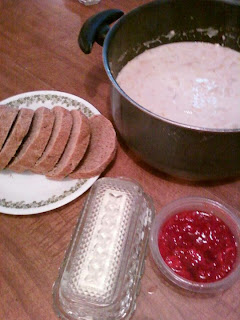 Today is corn & potato chowder night.  The corn was bought at the farmers market, in season, and frozen by me, so cost about $0.25.  The potatoes, onions, and stock were free, since the potatoes were from my mom's garden, the onion from my garden right here on the trailer park lot, and I made the stock from scraps most people would throw away.  A single tablespoon of olive oil, a little flour, a little thyme, and some salt and pepper would all be pennies.  If I paid for the milk used, cash out of pocket, it would have been about $.30 for the recipe.  I decided to supplement the soup with some bread and decided to use bread I got from WIC last week for free rather than making some in the interest of time and if I was paying out of pocket for the bread, I would have made it, but for the sake of argument, lets include the full price of the bread used, maybe a quarter of the loaf (if it was homemade, we probably would have eaten the whole loaf), so the full meal for the full family cost less than $2.

Tomorrow, I plan on making venison stew for dinner.  The venison was professionally processed, at about $0.70 a pound, and I usually use a bit less than a pound of meat for a meal for the family, so let's call it $.50.  Throw in some carrots from my garden, some peas I picked and froze out of my mom's garden, potatoes also from my mom's garden, maybe a little onion from mine: all free; venison stock I made, also free.  A little milk, a little flour for thickener, you have a stew for a few pennies more.  I haven't decided if I'll make bread, dumplings, or use some of the store bought bread, but anyway you slice it, it would be $1 or less.  Oh, look: another meal to feed 5 people for under $2.

Thursday is spaghetti night.  To be honest, I don't remember which sauce was made with tomatoes from my garden, which was from someone else's garden given to me, and which I bought from the farmers market when at the season's peak.  At most I would have paid about $.50 for the tomatoes I made the sauce from.  We generally use less than 1/2 pound of meat for the meatballs in a meal, so with the other ingredients in the meatballs, that part of the meal would be about $.50 as well.  I usually don't use quite a whole box of spaghetti, but for the sake of argument (and/or unusually hungry kids) let's say I do, so that's another $1 for the whole grain pasta, bought on sale.  Another $2 meal!

Friday's taco night.  I didn't actually buy the tortillas, since they were gifted to us, along with a whole bunch of other food back in December by a local homeschooling group, but, if I did, they would probably be about $1.  A head of lettuce, as I mentioned before, costs about $1, but we'll only use a small part of it for the tacos, so maybe $.20 worth.  The taco meat is leftover (and frozen) from last time we had taco night, so $.35 or free, depending on how you look at it.  Cheese, I bought in bulk quite a while ago and cost $33.49 for a 10 pound block, so let's say we use 1/2 pound (probably more than we actually will use) for a cost of $1.67 for the meal.  Tomatoes we'll do without, since they are out of season and the crap at the store just aren't the same as local, fresh tomatoes.  We'll only use a few tablespoons of sour cream, so the cost will be minimal there too.  All in all, this will be by far the most expensive meal for this time period at a whopping $3.50 or so (of which I actually paid about $2.50, since I didn't pay for the tortillas), to feed a family of 5.

Saturday's dinner of boneless, skinless chicken breasts, baked sweet potatoes, and sauteed green beans might sound the most expensive, but it is actually the cheapest meal for this time period.  I go the chicken breasts for free as part of my payment for helping harvesting a relative's chickens back in November.  The sweet potatoes were bought around Thanksgiving (yes, they keep that long if kept in a cool, dark place) for $.25/lb.  We probably will have about a pound to a pound and a half, so we'll say $.40 for the sweet potatoes.  I'll top them with a little butter and brown sugar and/or cinnamon, but the cost of that will also be minimal.  The beans were from my garden so they are free.  The butter for them was bought on sale for $2.25 a pound and I'll only be using a few tablespoons total, so maybe $.30 to $.40 for the meal.  That brings the total for that meal up to a insane $.75 or so.  For a family of 5.

Holy cow!  That person was right!  Six dinners for a family of 5, costing a total of $10.25, less than a cost of 2 crappy Little Caesar's pizzas when you include the tax.  Absolutely shameful and not thrifty at all.