Getting Naked in Front of You--defining my core values 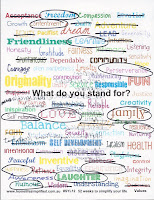 This week's assignment in the "Simplify Your Life" Challenge was extremely difficult. Participants were asked to pick 5 words or phrases that best defined their core values and rank them in order of importance. She provided a neat little printable full of possible value words to get people started. I printed it out and started off by crossing off words that had no business being anywhere near my values, words like "wealth," "patience," "beauty," and "success." Then, I went through and circled the words that appealed most to me and seemed to fit best with my life and worldview. I ended up with (in order from top to bottom of the printable):

Twelve words in all. Since the guidelines for the exercise suggested collecting 10-15 words to start with, then whittling it down to five, so far, so good. I looked at my list and thought to myself, how do I shave off of that?  They all seemed pretty core to my value system! After staring at my paper for a while, I realized that a lot of these words were very closely related. My loved ones are my family, for example. Contentment is a mild form of happiness in my view; perseverance, resilience, and endurance, at least in the way I was viewing the words, could be no more distantly related than cousins. When I started looking at them like that, it became clear to me that I basically had five families of words in that list. Then it was just a matter of ranking them. Here is that ranked list and how I came to it:
How about you? What are your core values?