I made this as a dessert to share for our Easter dinner and it got rave reviews.  I don't think it hurt that I used peaches I had canned last summer (not in a sugar syrup obviously), fresh from the farmers market.  I'm not sure if store bought canned peaches can be bought without a horrible syrup, so you might want to use frozen peaches or stick to fresh.  One of the comments I got was that the peaches tasted fresh picked!  I guess I got that sealing in the freshness down!  If they were in season, I would have used fresh.

I made a larger batch of this, since it was for a family gathering, but it could be easily halved for a single family (or piggy individual).  Just stick it in a 8x8 baking dish rather than a 9x13. 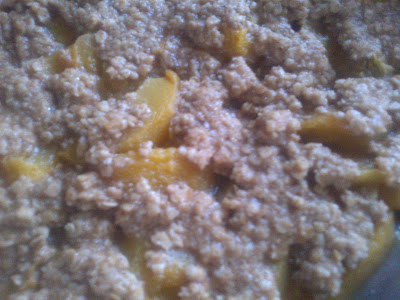 Preheat oven to 375.  Arrange peaches evenly in the bottom of a 9x13 baking dish and set aside.  In a small mixing bowl, combine oats, flour, cinnamon, and nutmeg.  Stir in agave.  Gently spoon mixture over peaches.  Bake for 20 minutes or until golden.  May be served warm or cold.