I've made various references to my dream home, my dream life, where I'd like my family to be, but I'm not 100% everyone knows exactly what I'm talking about, since it is pretty out of the mainstream, so I thought I'd spell it out in one post.  All I need is an acre and I'm pretty much there....

First off, my home.  I want to build an Earthship.  For those that aren't familiar, an Earthship is a passive solar house made primarily of recycled materials.  They are semi-underground so the north side of the house is insulated against heat in the summer and the cold in the winter to keep it a moderate temperature year round.  The south side of the house is windows at such an angle to let the sunlight come fully in during the winter and not as much in the summer.  They use rainwater for the water system, utilizes the graywater for toilet use and to irrigate the indoor greenhouse.  They are typically powered with solar or wind power so are usually entirely off the grid. The outside might look something like this: 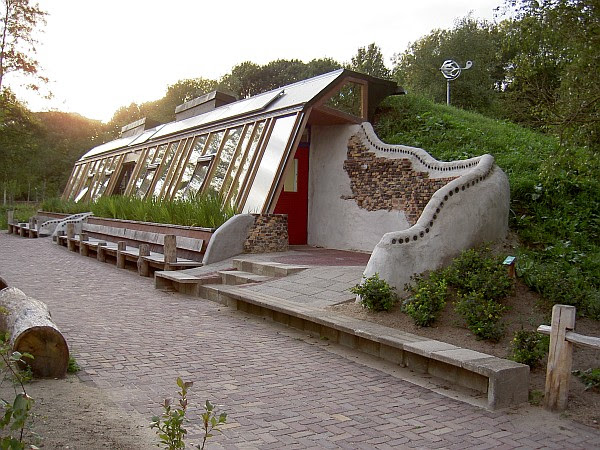 If you are wondering what it entails to build a house like this, I have pics of that too:
More Earthship pictures are also available on my Pinterest board about them, Dreaming of a Home.

Heading out of my imaginary house and into my "yard", which is actually my homestead, I plan on putting together something like this:
With my unconventional house being somewhat underground, I could actually put some of the raised beds or animal pens or something going over the house itself.  I am thinking an acre, rather than the quarter acre depicted here, because I want to have goats for dairy and meat.  I don't really want the pigs shown but I definitely want the chickens, rabbits, bees, and gardens.  I'm also imagining having a fish pond, but that would actually be inside the Earthship, so we could have fresh caught fish year round!  I also would like a larger piece of land than a quarter acre so we can (hopefully) produce enough to sell, either at a roadside stand, farmers market (that's the least probable of my ideas), or through contract with a local restaurant or two (definitely one the first year, then maybe expand, if it works out well enough and I can produce enough).

In addition not needing the entire footprint of my house dedicated solely to living space, by utilizing the land on top of it, I have a few other space saving ideas that could further improve the efficiency of my land use:
Without needing to buy food, pay for utilities, a home built mostly by ourselves (or help from volunteers that just want the experience of building an Earthship) once our land is paid for, our expenses will be minimal, so this is our plan for my husband's retirement.  It is a good life, a simple life, filled with good, healthy hard work and lots of love through the time spent with family....and the only thing that is currently keeping us from getting started is owning an acre of land.