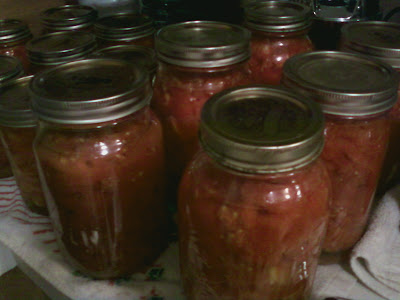 This year, I've decided I need to get fairly serious about canning.  Last year, I dabbled with some blueberry sauce, tomato sauce, and diced tomatoes.  This year, I actually bought a real water bath canner instead of using a stock pot, plus my husband bought me a pressure canner that I haven't used yet, but am dreaming of using post-hunting season when (hopefully) my freezer will be overflowing with venison and I'll need to find another place to put some, like in jars, probably largely in stew or chili form, for homemade heat-and-serve type meals.

Taking my home canning to a whole new level has been quite a learning experience for me.  Here are the top 10 things I've learned so far this year:

10.  The pop after lifting the jars out of the water is one of the happiest sounds in the world.  It isn't proof positive that you got a good seal and it is safe to eat in a few months, but it is a nice hint.   Plus it sounds cool.

9.  Wear comfortable shoes.  Usually, I'm a barefoot kind of gal, but standing for hours chopping and stirring and doing who knows what else can make the footsies a little tired.  Not to mention stepping on a stray peach peel that you dropped 10 minutes earlier has a serious ick factor to it.

8.  Make sure things that you are going to can are properly ripe.  I learned this one after battling with peaches that were seriously underripe.  Instead of the skins slipping gently off like the instructions I read said they would, I was fighting them for their lives, oftentimes with the peach making a break for it with amazing leaps and twirls that a gymnast would find absolutely inspiring.

7.  Take the weather into account.  The kitchen will get hot.  Very, very, very, dripping-with-sweat-in-a-most-unattractive-manner hot.  It might be best to can on a day or evening that isn't so hot.

6.  If possible, don't harvest more than you can process before you can get a chance to process it.  A lot of the stuff I'm canning this year is coming from a farmers market, so, to some extent, that's dictated when I get what I have to process.  On the other hand, I really didn't need to go back to the farmers market to get blueberries and tomatoes two days after I'd bought the peaches that I still hadn't canned plus I still hadn't done anything with some of the stuff the zucchini fairy gave me.  That's a recipe for a stress sandwich right there!  There are only so many hours in a day--it is a good idea to plan accordingly.

5.  Having enough cupboard space in the kitchen or pantry isn't a requirement for canning tons of great food.  As long as it is in a cool, dark place, the jars of yummies aren't going to care where you keep them.  I probably will end up keeping some of my summer treasures in a jar under my bed or in my bedroom closet over the winter, or maybe tucked behind books on the bookshelf.  I vaguely remember my mom keeping her home canned goodies in a downstairs linen closet, so I'm not the only one who has ever put food in unusual places.  Just don't forget where you stash it.

4.  Having the right tools makes the job a lot easier!  Last year, I didn't have anything that was actual canning gear except the jars and two piece lids.  I used a regular funnel with a pretty narrow bottom for getting the stuff in the jars and salad tongs instead of an actual jar lifter.  This year, I splurged on an actual utensil set

with a real jar lifter, funnel, a tool for removing bubbles, and a magnetic lid lifter.  So much easier--plus it is fun to pretend that the lid lifter is a magic wand.

3.  It's all about the acid--and somethings might be more acidic than you think.  I knew from last year that blueberries and tomatoes were acidic enough to just need a water bath canner, but I was surprised to find that I didn't need a pressure canner for peaches or applesauce.  I probably would have canned a lot more last year if I had realized that.  Then again, it might have been a good thing I didn't tempt fate more than I did, since I hadn't yet learned.....

2.  Know what the heck you are doing!  After I started reading the Ball Blue Book

, my new canning bible, I was seriously amazed that we lived through the previous year of my incompetent dabbling in last year.  Obviously, just starting out, you aren't going to know everything, but find someone who does to teach your or a very, very thorough instruction book, like the Ball Blue Book

1.  Canning is fun!  Okay, it really isn't.  It is a long, labor intensive process that will likely lead to the aforementioned aching feet and sleep deprivation.  However, it is very empowering to realize that no one is in control of your food but you and you will be able to feed your family the very best food there is all winter long.

Now, I'm off to do more canning!

Email ThisBlogThis!Share to TwitterShare to FacebookShare to Pinterest
Labels: putting up produce