Yesterday for breakfast, we ate the blueberry bread that had been my blueberry bagel fail with cream cheese.  Not super exciting or delicious, definitely not something I'll make again, but edible and at least fairly nutritious.

For an afternoon snack, I made soft pretzels from scratch.  I initially put cinnamon & sugar on them, but everyone except my daughter decided they were better plain with mustard instead.  Either way, they were a lot healthier than anything you could buy at the store and they were a lot lower sodium!  The kids had milk with their pretzels and I had my second Diet Coke of the day. 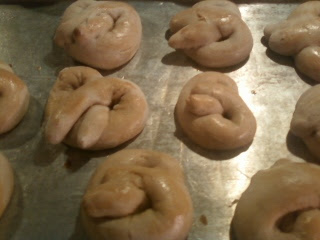 Preheat oven to 425.  Mix yeast, water, sugar, salt, and honey in a large mixing bowl.  Add the flour and stir in completely.  Sprinkle a small amount of flour on a clean surface and knead dough 5-10 minutes, or until smooth.  Divide dough and form into desired pieces (letters or numbers would probably be fun for small children).  Place shapes on greased baking sheet.  Brush with beaten egg and add any additional toppings you desire.  Bake for 15 minutes or until golden brown.  Let cool slightly before serving.  They can be frozen and reheated in the microwave. 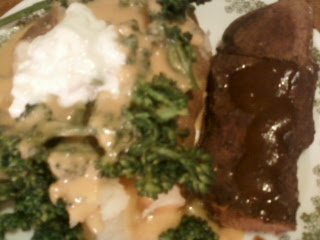 We couldn't end up having pasties for dinner as I had planned because we were almost completely out of butter, so we ended up having a steak dinner instead.  People always rail against people on food stamps eating steak dinners, but, let me tell you, this was a super cheap thing for us to be eating.  First off, the steak was venison that my husband had killed himself.  We did end up paying to have it professionally processed (because he was still working at the time and didn't have time to do it, or a good place, since around the time he shot it was when they were supposed to be remodeling the garage), but even that works out to be about $0.70 a pound and we only ate a pound of meat for dinner between all of us.  The bulk of the dinner consisted of a deluxe baked potato.  The potatoes were the last couple of a 10# bag I had gotten at a farmers market this fall for $3, which was more like $1.50 for the bag with the Double Up Food Bucks program (or free, depending on how you look at it, since they were grown in Michigan and purchased with the free tokens because of that).  The broccoli was some that I'd gotten free from the Broccoli Lady, a person that offered up a bunch of broccoli on Freecycle that I was happy to receive from her.  The cheese sauce was made with the fat drippings of the steak, a little flour, a little milk, and a couple ounces of cheese (so about $0.40 worth at what I paid for it).  So all in all, with the sour cream and steak sauce thrown in there, we paid probably less than $1.50 for all of us for that dinner!  The kids and I had milk for dinner, which might have put us over that $1.50 mark, but it was covered by WIC.

A bit after dinner, my husband asked if I could bring him some chocolate chips.  I told him I didn't think we had any, but he said we did because he had gotten into some the night before.  Sure enough, I looked and he had found the chocolate chips I'd hidden in case of a chocolate emergency.  *sigh*  So he and the kids had chocolate chips for dessert. 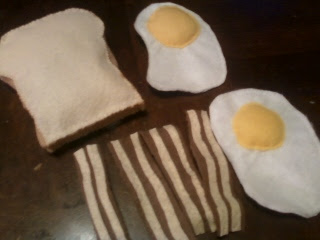 Late at night, to celebrate the completion of my first piece of felt bread, my husband and I had a bit of ice cream with homemade chocolate syrup on top.  That turned out to be a bit of a mistake though, since then I was shivering like crazy as I worked on the second piece of bread.  I got it done though, so now mt felt food totals are 2 eggs, 4 pieces of bacon, and 2 pieces of bread/toast.