I know a lot of times I seem pretty happy and make it sound like it is easy-peasy to do what I do. but I've also not hid the fact that I suffer from depression and anxiety disorder.  Some days, the strict food budgeting and the anxiety come crashing together and I become a drained, sobbing, emotional trainwreck.   This typically happens at least once a month, but this is what set it off this time. 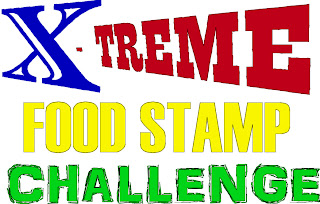 For breakfast, my 6 year old son decided to get himself and the 2 year old bowls of cereal (my daughter is still at her grandma's house for a few days).  He forgot to put the box of cereal away when he was done though, left it on the table and wandered off to play or watch tv or whatever.  Before I noticed this, my 2 year old decided he wanted seconds and that he was a big boy who could get it himself.  Predictable, this resulted in the entire remaining box of cereal, the last cereal we'll have in the house, dumped all over the table.  I salvaged what I could, but it still resulted in a lot of lost cereal, since a fair amount landed in bowls that had a bit of milk in them or areas of the table that had a bit of liquid, either splashes of milk or water, on it.

Eventually, I got around to making breakfast for me and my husband.  We had eggs over easy and toast made from the sandwich loaf of bread I'd made the day before.  The boys wanted some too, so that served as their lunch.

We ended up having a late lunch of leftovers.  My husband got himself some of the roast venison dinner from the other day, but rather than putting gravy on here which would have been essentially free since it was made with the pan drippings and a bit of flour and water, he put ketchup on it.  When he got the ketchup out, I noticed that nearly half of the bottle, which I had thought was still full in the pantry, was actually nearly half gone!  I started to have a panic attack.  I became convinced we were going to run short of food for the month.  I do not deal well with discovering we have far less of something than I thought we had.  Everything is on too tight of a balance for that, especially in my brain.  I eventually calmed down enough to have my lunch of some of the broccoli, cheddar, potato soup from the day before and some of the bread I'd made and get some for the 2 year old as well.  The 6 year old just wanted bread at that time, but he and the 2 year old snacked on some cheese and carrots later as well, to balance it out and turn it into a decent dinner, since that's really what it was.

While the toddler was napping a bit later, my husband wanted some ice cream.  I'm not a huge fan of plain vanilla (especially artificially flavored vanilla, which is the kind of ice cream we can sort of afford), so I made some chocolate syrup to go on top of it.  What an improvement!

Later yet, my husband got out the tortilla chips, which by this point were mostly large crumbs rather than chips, for another snack.  I asked him if he'd like me to scrounge up some salsa to go with them, since the salsa was virtually free, since I made it, and the chips were expensive (yes, when you are on a budget like $161 a month to feed 5 people, a $3 item is considered expensive).  He declined and he and the boys ate up the rest of the chips.

I lost it.  Between the tortilla chips, the ketchup, and the juice that everyone seems to think we should buy more of because we are out of it, that's about $10 worth of food.  To most people, that would be no big deal, but here, we only have $61 to last us until the 21st, so that is a huge chunk of our budget.  We were going to have to go without something if I couldn't find a better solution.  I had a huge cry over this, to the point that I made myself sick.

Finally, I gave in and took one of the Ativan that the doctor gave me at the hospital a couple weeks ago for when I was just too stressed.  Then, I went to lay down and rest for a bit until the medicine could take effect.  Eventually, I noticed I was still tired (don't know if that was from the medicine or just crying), but I was emotionally numb.  I was calmed down and could start coming up with solutions to the problem.  I started searching for ways I could replace the ketchup by making some with things I have on hand like my homecanned tomatoes rather than buying some.  I discovered that I can't make authentic tortilla chips since I have cornmeal, not masa, and probably can't turn my unground corn into masa at this point because I don't think unslaked lime (the mineral, not the fruit) probably can't be bought on food stamps, even if I can find it in a store.  I probably could make some cornmeal based chips that would still taste good and served to get the homemade salsa into mouths.

I didn't work on any felt food or any other crafty or culinary project yesterday.  I was just too drained and worn out.  Hopefully, today will be better.  Maybe I'll even make some of those chips, so I can have some chips and salsa while making even more felt food tonight.