For the second day in a row, yesterday, the kids were too excited to go outside and play in the snow for me to make breakfast before they went.  Instead, they made themselves sandwiches of cheese and ketchup on bread.  Yuck!  It would probably be considered a balanced meal at schools though, since it had all that ketchup on it!  Double yuck!  I'm so glad I don't send my kids to school (except my 12 year old that lives with his dad 2/3 of the year, but that isn't by my choice.  That was a decision made by his dad that he sadly supports).  Instead of sitting in a boring classroom all day, they played outside, built a snowman for their little brother to knock over, (did some actual bookwork,) went on an adventure to the corner store to get ice cream using their money that their grandma gave them, and built a giant fort in the living room, all before their friends got out of school and even though they got to sleep much, much later than their friends ever do!  I digress though.... 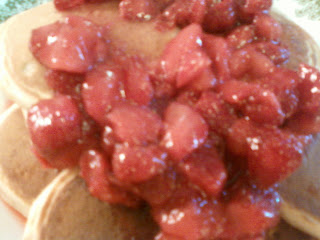 When they came back in, my husband, the toddler, and I had had our breakfasts of pancakes with strawberries on them, basically strawberry shortcake for breakfast.  Mega-yum!  The other kids had it for lunch when they eventually did come inside to play (prior to building the fort).

Somehow my husband and I forgot to have lunch, as sometimes happens, but we worked on cleaning out the fridge for dinner.  Cooking up that roast instead of sticking it in pasties yesterday gave us a lot of leftovers that I wasn't expecting to have!  There is still a fair amount of that roast left even now, so I'm thinking of making roast beast and cheddar hot pockets next week.  The kids and my husband had ice cream in the evening as well, but with the house at 65 degrees or below at all times, ice cream doesn't much appeal to me this time of year!  I did have a couple Diet Cokes through the day, though.  I didn't see anyone else drink anything other than tap water, but they might have been sneaky and got themselves something else when I wasn't looking.  Oh, and I also polished of the last of the jar of salsa I've been working on eating up the past few says.

The high point of the day for me was when we checked the mail and found a surprise check from a lady at the church with the subject line of "kids Xmas" (there was also a used book I had ordered from PaperbackSwap for my niece's Christmas presents that looked brand new, so that is awesome too!).  I finally had some money to get the kids some Christmas presents!  In the interest of making it go as far as possible, I headed to the craft store and picked up some felt, poly-fill, muslin, and a couple little wooden things to paint.  I plan on making some felt food, a rag doll, a fairy wand (one of the paintables), and a little train engine (also one of the paintables).  Basically, everything I need for my littlest ones.  I told the cashier that was the bulk of my Christmas shopping for two of my kids and she was shocked.  Like more shocked than the cashier at Meijer was the other day when I just bought the baking stuff and told her that was my groceries for the week.  Her jaw literally dropped.  I explained what everything was going to be and she was suitably impressed and somewhat appeased that I wasn't cheating my kids out of a good Christmas.  Like every kid needs a gajillion crappy plastic toys to have a good Christmas.  Pu-leeeeease!

Anyhoo, after the kids settled down for the night, I broke out the craft goodies and my sewing box and set to work stitching.  I don't know how to use a sewing machine (sad, I know), so all my gifts will be sewn by hand.  I figure it would take as long to learn to use the sewing machine as it would just to do it the easy way...and probably less stressful!  My first project was a felt egg.  I plan on making some bread and bacon to go with it, for sort of a breakfast felt food set, then also making some tomatoes, lettuce, and cheese to go with the bread as a sandwich set.  If I have time, I'll probably make even more.  I'm hoping to do at least one project a night until Christmas.  Here was the result of last night's effort: 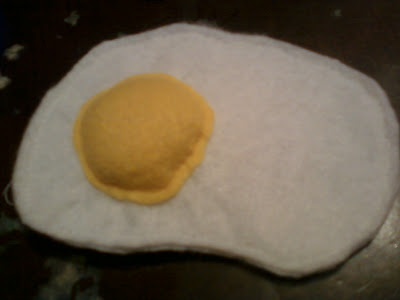