X-Treme Food Stamp Challenge--makin' my own bread and bacon

The first part of the day's eatings yesterday wasn't exciting at all:  Honey Kix with milk for breakfast, leftovers for lunch, the kids snacked on Cheerios, homemade applesauce, and cheese, with my husband and I having a little cheese as well.  Dinner though....

I made whole wheat bread yesterday, two loaves: a free form artisan loaf for dinner and loaf of sandwich bread for eating today.  The rest of dinner was broccoli, cheddar, and potato soup.  I grated a couple carrots and threw them in there for a little added nutrition and the pretty color.  I love that soup soooooo much.  I admit, I way over ate.  There is still plenty more for lunches for the next day or two too though.  Yay! 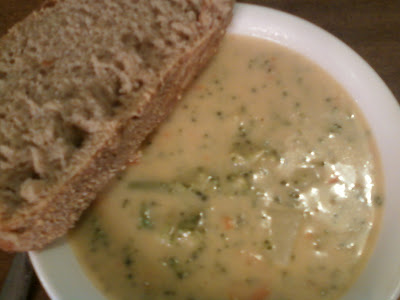 Not only is that soup super delicious, but it is soup-er cheap (hahaha!  I crack myself up!) for me to make.  I made the chicken stock I used, the broccoli and carrots were gleaned from other people's gardens, the 1/2 pound of cheese I used was only about $1.60 when I bought the 10 pound block.  The bread was dirt cheap as well, since I got the yeast with a combination of sale and coupon so each yeast packet was about $0.15.  All of dinner probably cost less than $2.50 to feed the family and, like I said, there was lots of leftovers!

After dinner, I was stuffed for quite a while, but my husband and the 2yo had a bit of ice cream.  I snacked on some caramel-y corn much, much later in the day.

For drinks, we still had to use the bottled water because the boil water advisory became official with a notice on our door, but the kids and my husband had a bit of white grape juice with dinner as well, and I had my usual Diet Coke (yes, I know how bad it is for me).

After the kids finally went to sleep, I worked on making more felt food for Christmas presents for my kids.  I made another egg (using the directions here, but hand sewing, rather than using a machine) and made bacon, which was my own design.  I stripped the papery parts off some twisty-ties and stitched them behind the light strips on the bacon to make it crinkly shaped and poseable. 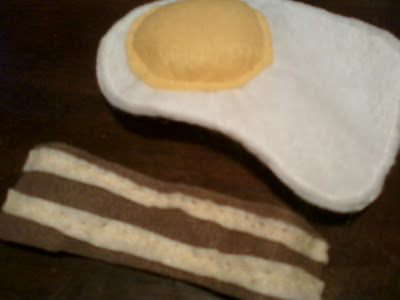 Tonight, I hope to finish up about 3 more strips of bacon and start something else.  Maybe fake bread?