Yesterday was admittedly not my finest moment of feeding the family.  I still felt like crap emotionally when I woke up so I ended up not making breakfast.  Eventually, in a fit of horrible parenting, when the toddler started having a temper tantrum about something and I couldn't figure out what his problem was, I gave him some chocolate chips to calm him down.  Of course, then everyone else wanted some chocolate chips as well.  I had a couple handfuls myself with a couple giant glasses of milk.

Eventually, my husband seemed to realize no real food was forthcoming and made some eggs and cheese for himself and the boys.  He offered me some as well, but I don't like eggs without some sort of bread-like substance, which we were out of, so I declined.

Around dinnertime, I got motivated enough to make dinner.  We had meatball stroganoff on rice with peas.  Actually, I cheated a lot on this and got rid of some leftovers to boot.  My husband doesn't care for rice, so I gave him the last of the potatoes from the roast dinner a few days before instead.  And the sauce wasn't real stroganoff (I don't actually even know what real stroganoff sauce would be, but I'm pretty sure this isn't it).  I took the gravy leftover from the roast dinner, threw it in a skillet with the frozen meatballs to warm up, then toward the end of the cooking time, when the rice was about ready, I stirred in a little sour cream and Worchestershire sauce. Using premade and frozen venison meatballs, we only usually end up using about 1/2 pound of meat to feed the whole family, so this meal for the whole family probably cost less than $1! 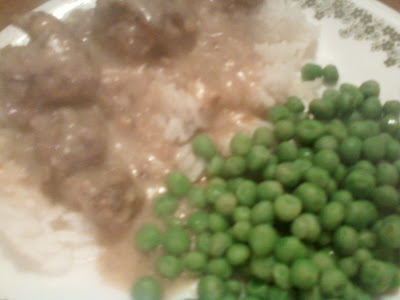 Much later, after the little ones had gone to sleep (my mother-in-law came by and switched kids before dinner, so my daughter was back, but my 6yo was gone), my husband and I had some popcorn made on the stovetop, and I finally had my first Diet Coke of the day, as I worked on making felt food for the kids' Christmas presents.

No clean out the fridge night this week, because Monday's, Tuesday's, and Saturday's dinners are ones that can be frozen quite well, Friday's and Sunday's meals are cooked from the freezer stash, and Wednesday's meal is made to order, so there should be negligiable leftovers there.