Bunny on a Budget--a Thrifty Easter

Since most people that read this probably celebrate Easter, I figured I should address it on this blog, hopefully before people go all nuts and spend tons of money on what is supposed to be a religious holiday for a religion who's holiest of dudes said "It is easier for a camel to go through the eye of a needle than for a rich man to enter the kingdom of God" and spent his time roaming around helping people rather than setting up shop somewhere to try to earn some serious dough.  *deep breath after that sentence*  Easter doesn't have to be expensive you know.  That bunny's on a budget!  In our family, we typically go to church, the Easter bunny sneaks in and leaves stuff to find while we're gone, so there's an egg hunt when we get back, and then we feast, so that's the parts of this dealy that I'll be addressing.

First off, church Sunday.  Everyone gets dressed in their very fanciest fancy clothes and parades around at church.  While I can fully appreciate the symbolism here, really, you don't have to go out and buy some super fancy clothes.  Really.  No one else will know if that pretty dress was secondhand or off clearance rack and no one cares.  Seriously.  God does not care what clothes you wear.  I'm not any sort of expert on theology, but of this I'm pretty darn certain.  What with natural disasters and nuclear disasters and moral disasters and everything else going on in the world, I'm fairly sure that whether you are wearing something brand spanking new is not even on God's radar as something to note down to decide on whether he invites you over for eternal tea.  So get something that looks nice if you must, white is a good symbolic color if that's what you're looking for in Easter Sunday clothes, but get it at a price you are comfortable with.

Secondly, time for the kids to have their fun.  If you're wondering how this miracle of the Easter bunny showing up while we are gone, it is either through an accomplice or a mom or dad getting everyone in the car and then "oops, I forgot something in the house!  I'll just run inside real quick and get it" and distributing the goodies.  I like to have a nice Easter basket out where they can find it, filled with great little things like sidewalk chalk, crayons (usually with coloring book), bubble stuff, and other inexpensive classic little things that can easily be acquired very cheaply at a dollar store.  I sometimes will throw a couple treats in there and end up with a basket that preassembled would cost probably $15-20 (I don't know, really.  I just see those baskets at the store and laugh.) for under $5, including the cost of the basket.  I don't buy that plastic grass stuff because I think it looks awful, it is overpriced, wasteful, and the kids just throw it on the floor (or ground, if we do it outside) to get the good stuff out easier anyway, so I save my money for things that will be appreciated.  I try to save the baskets from year to year to reuse, but sometimes the kids get too rambunctious and destroy them before they can be put up.  For the egg hunt, one money saving thing to do would be to just use real eggs, but what fun is that?  Besides, I have nightmares (not literally, but it does concern me) about a real egg being thusly hidden...and not found for several months, at which time it is discovered by aroma.  Instead, I have some of the plastic eggs you can buy for such things that I fill with inexpensive candies purchased in the bulk food section, rather than the more expensive candies in their little expensive (and wasteful) packaging prominently displayed where the stores are most hoping you'll grab them, or I'll put little prizes like stickers, Silly Bandz (generic ones), or other small toys rather than candy. 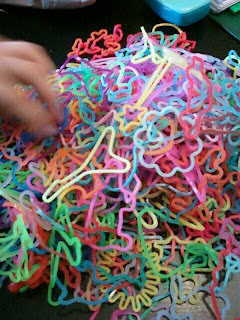 For the feasting, remember that the important thing is spending time with your family.  A fussy dinner with a million and a half dishes to get ready just isn't going to cut it, in my book.  I tend to like to serve a nice turkey ham (we don't eat pork, but I still like the ham every now and then!), potatoes au gratin, green beans from the previous year's garden, and some nice salad with this year's greens if possible.  Dessert varies, but is inevitably something that could be made the night before and is ready to serve without any further fussing around (rhubarb crisp made ahead is a favorite!).  All and all, this feast usually costs about $10 for me, but no one ever goes hungry or complains (except my picky eater sometimes will, but that's to be expected any time I'm not serving tacos or spaghetti).  Usually, there's at least a bit of ham left over even, that I cut up and freeze for later use.

So our complete family Easter celebration for 3 kids (the oldest is at his dad's for Easter) and usually 4 adults is about $30-40.  I feel like that number is high and I might try to bring it down this year, but apparently, the average family spends way over $100, not including Easter clothes, so I guess I'm doing good!