How I Plan My Garden

I'm not going to say this is the only way to plan a garden, or even the best way, but this is how I planned my garden this year.  It is quite a daunting task to turn an entire trailer park lot, no matter how small it is, into a garden, ideally without getting into trouble with the park management.  This is how I've handled it.

First, I made a list of all the fruits and vegetables my family enjoys and eats on a regular enough basis.  Then, I crossed off the things that I couldn't grow this year because it would cost too much to get started, like trees that I could grow in pots outside (not going to leave any of my plants here when we move!), or things that just won't grow in Michigan.  Once I had a fairly realistic list of what I wanted, I looked in the refrigerator to see what sees I had left from last year and checked them off my list.  Then, I asked some other gardeners if they had a few seeds to trade or give me of the things I was missing.  The few things I didn't have after that, I ordered from Seed Savers, in the hopes that I'll be able to save seeds I harvest for use next year and not have to purchase seeds ever again for a lot of the plants.

Next, I drew out a rough diagram of where I was going to plant each kind of plant.  I decided to plant the things I could get into the ground first, like spinach, onions, snap peas, and carrots in the garden boxes I already had put together so I could get them planted as soon as possible.  When the weather warmed enough that I could start planting, I largely ignored my plans and filled as much available space with seeds as I could, keeping in mind how long they would take to be ready to harvest and whether that would interfere with what I'd originally planned for that space.  For example, up against the house, I want sunflowers for most of the season, but I planted spinach in that area for now with the idea that the baby spinach will be ready to harvest before the last frost, when the sunflowers can go out.

Then, as the last frost date creeps closer and closer, I had an inspiration.  I thought to myself that, if the Three Sisters grow well with the beans climbing up the corn, maybe something could grow on the sunflowers too.  I discovered that, indeed, cucumbers and melons do well growing in and among sunflowers...or corn.  Then it occurred to me that maybe corn and sunflowers would also do well together and I could plant my Blue Jade corn, which only grows 3 ft high, on the west side of the sunflowers and they would both get the light they need and be a good use of space.  This should create a fairly thick wall of vegetation to be kind of natural(ish) wall to keep the kids in the yard, without violating the park's rules about not having actual fences.  I finished digging the trench for this plant party today, stepped back, took a look, and decided that the fence really should curve around and create a barrier at the end of the driveway to further conceal what all is going on in my yard.  With this in mind, and keeping in mind that my spinach and lettuce planters would have to move off the patio at some point, since I'll need that space for the ground cherries, I decided that those planters would work well as such a barrier.  I thought tomatoes in buckets might go nicely behind them, but then I realized that the bright orange buckets might not be the most aesthetically pleasing thing there, so something short should go in front of them.  Another perfect spot for more Blue Jade corn!  I put my plan into action and got the area all ready...and got a lovely farmer's tan started for the year in the process! 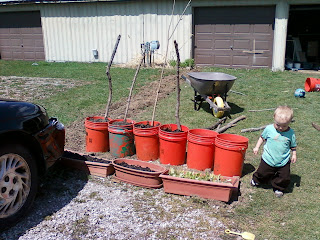 I'll now use this as the basis for figuring out where the next area, probably a Three Sisters "mound", once I figure out how much of a pathway I want to leave.  I'll use that to gauge where the next area should be, and the next.  Along the way, I'll figure out where to put any extra seedlings I have, since I seem to have way more seedlings started than I originally figured space for (what can I say?  I get excited!).  I swear, every time I look, it seems to me that I have more space to fill, but, believe me, I'll find a way to fill it!  I don't believe in lawns, and we don't have a lawn mower, just a weed whacker, so I'm strongly motivated to make the most of my limited space--and grow as much as I can on my trailer park homestead!