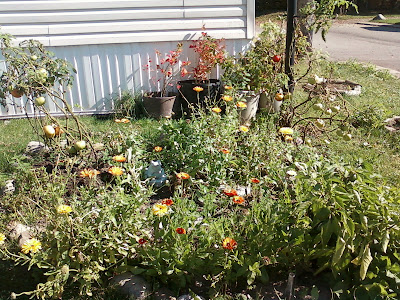 For about the last week and a half, we've had temperatures around 80 degrees...in Michigan...in mid-October.  Note that we've already had a couple frosts.  But now the weather's been playing at summer again.

In some respects, I like it.  I haven't had to worry about covering the plants up to protect from possible frosts the past week and a half.  It has been gorgeous weather for tucking  the summer sections of the garden into bed for the winter.

It is a little freaky though.  I'm not used to this at all!  Plus, it seemed weird to have to worry about watering the garden when more than half of it is already gone for the weird.  And I really shouldn't have to worry about my spinach bolting from the heat in October!  After frosts have already came and gone! 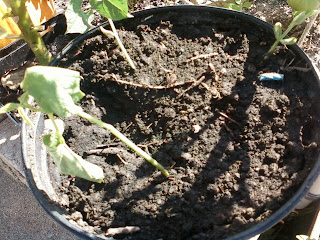 Some of the beans that I'd been leaving out save for seed got a little over excited about the weather as well.  Four of them sprouted!  When I was cleaning up the remnants of the garden in the path of the contractors, I discovered the silly little buggers.  I did what any somewhat obsessed gardener would do of course:  I potted them so I could bring them in for the winter when Mother Nature remembers what season it is!

Another possible interesting development, still just in the rumor phase, but worth noting, is that the neighbor told me that all the driveways in the trailer park are being connected to the garages.  So this area: 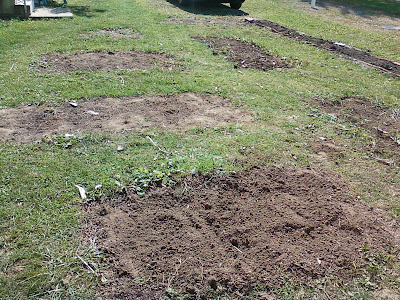 where the cornfields, Three Sisters beds, mystery plants, and so much more, may not be available for planting since it might be covered with those horrible rocks that get used in driveways so often.  Part of me wonders if it is part of a plot to keep me, and people I've inspired to mimic me next year, from gardening so extensively in the yard, given the history of the manager's issues with my cornfield.  If that is the case, they have another thing coming, since I'll just plop raised beds right in the middle of the driveway and keep on gardening!  A more rational part of my brain figures this is something that was probably already planned and such an extensive project to keep lil ol' me from gardening is a pretty unlikely scenario.

Other than that, not much has changed on the 'stead from last week.  Here's some random pics of what's still here: