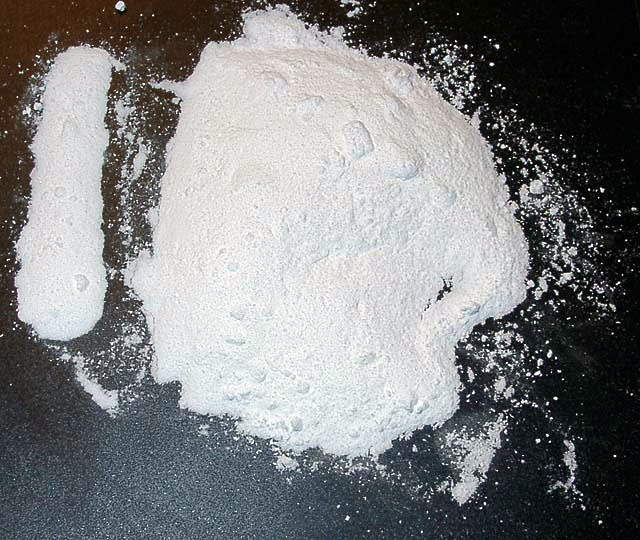 Baking soda and baking powder are not interchangeable.  Actually, you can use baking soda to make baking powder: simply combine 1 part baking soda, 2 parts cream of tartar, and 1 part cornstarch (omit the cornstarch if you are going to use it right away.  If you are allergic to corn or just don't want to use it, potato starch may also be substituted).  The science geek deep inside me had fun with this post, so be sure to scroll down to the end if you want to know why you want to add cornstarch if you aren't going to use it right away.

I received this actual email yesterday from a reader who I assume wants to remain anonymous since it was sent to my email instead of posted on Facebook:


Oh baking guru, You who can whip up delicious things from stuff you find
laying on the ground, I need help and I beseech thee!

I am *not* a baker and I may have just made a boo boo. But I don't know
if it'll be an *edible* boo boo. I had a coffee cake recipe I was
making. I decided to do one with applesauce because we had that and
we're short on eggs. No problem, zipping along following the recipe...
discover I've put in baking POWDER instead of baking SODA. So I added
the soda. Then I thought about it for a minute. Did I just doom my food?
I have NO idea what adding them both does instead of just adding one.
*blush*


Unfortunately, by the time stamp on the email, I was probably several hours too late to impact the situation.  If this person had simply added 2/3 of the original amount of the baking soda on top of the baking powder booboo, there might have been a chance of saving it, since the other ingredients in the baking powder might have affected the taste, most likely adding a bitter component to the flavor, but it might not have worked out too badly.

Baking powder and baking soda work differently, but perform the same function, as a leavening agent, something that makes the baked good rise.  Baking soda is a base (which is why it is fun to clean toilets with it, some liquid soap, and vinegar, the vinegar being an acid) and reacts with an acid in the recipe to form bubbles, causing the baked good to rise.  Baking powder, on the other hand, contains both a base (baking soda) and an acid (cream of tartar, aka potassium hydrogen tartrate).  In their powdered forms, they don't react, but once you add moisture, either in a recipe or with moisture from the air, the party starts!  This is why you want to add cornstarch to homemade baking powder that is made ahead of time, to absorb the moisture from the air instead of the acid or base to extend its shelf life.  That's also why any baking powder, whether it be homemade or store-bought, has a shelf life: eventually the moisture will cause a premature reaction, so it won't react in the recipe.  It's already spent.

When I run out of store-bought baking powder, I have no intention of replacing it.  Even though it looks like it is more expensive to make your own, if you don't use a lot of it, that may not be the case once you factor in the waste of what you don't use before it goes flat.  Cream of tartar and baking soda, on the other hand, have a shelf life of approximately forever, so there should be no waste there.  In addition, if I'm not buying baking powder, I don't have to worry about accidentally picking up the kind with aluminum, a concern for me since my favorite grandma died of Alzheimer's.  Plus, I've heard it just plain tastes better to make it fresh, and I'm always for better tasting baked goods!