Free Food All Around 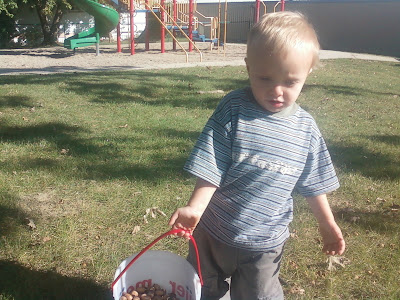 It boggles my mind how much free food goes to waste in this country because either people don't see it as food, see it as an option, or just flat out don't realize what it is.   When driving down the road with my family yesterday, we noticed scores of black walnuts, smushed into the road, a man raking apples out of his yard (we presume to throw away.  If we hadn't been in a rush, we might have stopped and asked him, since windfall apples could still be made into some pretty awesome cider!), and my 2 year old excitedly was yelling "PEAR!  PEAR! PEAR!" when we approached where we had gotten a total of about 1 1/2 bushels of pears free recently because they had three pear trees in their yard, didn't want the pears, so they stuck a sign on the side of the road offering "free pears", an offer my kids and I were glad to accept!

I was actually contemplating this during my son's most recent soccer practice, as my 2 year old and I gathered black walnuts from schoolyard.  A woman was out walking her dog and approached me to see what I was doing.  She said she'd seen those green balls a lot when she was out walking and even stepped on a few.  She thought they might be some kind of apples or something and was quite fascinated as I described how they went from being annoying green balls that got in the way of the lawnmower to being high quality food for my family.  Later, as I was shelling acorns while supervising my kids on the playground after practice, she came up to me again and told her friend that was with her (who didn't seem so fascinated) about the walnuts and asked what I was doing now, if this was the next step in the walnut process.  I told her that walnuts were much too messy to be dealing with at the playground and that I was working on more free food, but a different kind of nut.  She seemed to think this was somewhat interesting, but I doubt it made any sort of long lasting impact in her life.  Like a person commented on my article about how everyone can afford healthy food, "I don't know many people who are willing to scourer <sic> around for fruit and nuts, that's just not realistic."

Why isn't it realistic?  Free food is all around us, from the broadleaf plantain and dandelion greens that I'm constantly tempted to slip in with my spinach that I'll be blanching and freezing (so no identifiable leaf could later be separated out and I couldn't then be asked "what's this?"), to the pears and apples I mentioned above, to the walnuts and acorns I've been "playing with" the past few days.  It wasn't even a big time commitment to gather the pears, just a quick walk with the family or popping out of the car for literally 5 minutes or less when we were on our way somewhere else.  The acorns were gathered at the trailer park's playground (yes, I should finally be getting some acorn recipes up soon!) while I watched my kids play, until they and their friends joined in the "fun" of helping to gather them.  And like I mentioned, the walnuts were gathered while I had to be at the school for my son's soccer practice.

The processing of nuts can be a bit trickier, but still can be very doable, even if one is short on time.  The neighborhood kids joined right in the fun of stomping the walnuts to get them out of their husks, then it was just a matter of separating them out from the goo, washing them off (with the freakishly warm weather we've been having, I mostly just "powerwashed" them with the jet stream on the sprayer nozzle), and setting them in a cool, dry, dark place (the back of my garage) to cure for two or three weeks.  Yes, the acorns are time consuming to shell, but I'm doing them at odd times when otherwise my hands might be idle, like while watching television or during the car ride I mentioned above (for the rest how to process acorns, see this post).

With the growing number of people going hungry in this world and even in this country, isn't it nuts that so much of this fantastic, free food just goes to waste?