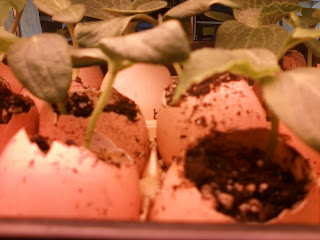 Recently, it was time for me to start my seedlings for my melons, cucumbers, and squashes.  I remembered that at least some of those plants get rather ornery if their roots are disturbed, so I was not a happy camper when I discovered that I was out of peat pots to plant them in!  Fortunately, I think more outside the box than in, so I was able to come up with some alternative solutions.

The first idea that came to me was toilet paper tubes.  And why not?  They are compostable anyway.  So I not-so-enthusiastically dug through the bathroom trash cans looking for toilet paper tubes (my husband and kids always seem to forget to feed them to the worms).  I found two, not nearly enough for the army of vining plants that I had in mind!

I temporarily retreated and just started the seeds on paper towels to get them going while I slunk back to my thinking chair to come up with another solution.  I figured that if the seeds didn't like me fondling their roots at that age, they'd either get over it and be okay, or I'd have plenty of time to start over...this time with something to plant them in already in hand.

While the seeds were happily sprouting in my t-shirt drawer, I started saving the toilet paper tubes that became available as well as egg shells.  To save the egg shells, I broke the pointy end to get the egg out, taking care to break as little of the shell as possible.  I'd wash them out, then I stuck some moistened potting soil in them and poked a few holes in the bottom for drainage.  I've seen other sites that say to poke the holes before putting soil in them, but I found that it was easier to do after the soil was in there, since it gave the egg more structure and made it less likely to crack.  Then, I would plant the seedling.  I used banged up egg cartons that I couldn't reuse for more eggs with the tops cut off them to hold the eggshell planters.  When it comes time to plant them in the ground, I'll just crack the shell more, then stick the whole thing in the ground.  I remember reading last year that the calcium in eggshells makes a great fertilizer, especially for squash, so it should be interesting to see if these plants do better than their counterparts in toilet paper tubes.
To make toilet paper tube seedling cups, I cut the tubes in half.  Then I cut notches all around the bottom, so they could be collapsed in to form a bottom.  I put a piece of tape on the bottom to kind of hold everything in place, but I'll take that off before planting them.  The one thing I've noticed so far about these planters is that they are more prone to falling apart than the eggshells and some of them even have a little mold on them!  Uh oh!  I put the toilet paper tube planters on the top part of the sacrificed egg cartons to keep them organized and not falling apart in the seedling tray. 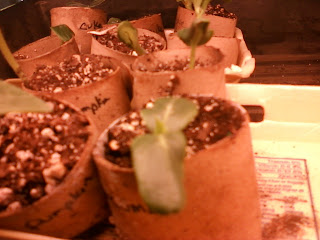 I think next year, I may just use the eggshell seedling cups, since they seem to be working better, but I think I'll have to wait until I transplant them outside to get a final verdict on what works best.  In the meantime, I have a ton of seedlings growing in what would otherwise be trash!