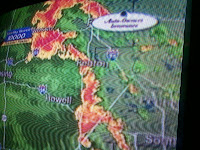 The worst part of living in a trailer park is not the assumptions people make about you for living in "that kind" of place or nosy/irritating park managers.  Nope, the worst part is severe weather, especially tornado warnings.  What do you do when you have no place to go?  Again, my family was faced with this yesterday, as tornado warnings were issued for both of the counties we sit on the border of.

My husband is of the mind that, since we can't really do anything about it, we shouldn't even monitor the current weather because whatever will happen will happen, regardless of whether we are paying attention.  I just can't do that, though.  This time, even if I wanted to, I couldn't do it, since I was still outside putting things away from the kids' playing and my accomplishing a lot (pictures to come later in the week of what all I did today!) of things in the garden when the emergency broadcast system went off on a neighbor's radio and the 6 year old, who knows what that meant, knew something was going on.  I herded the boys in the house and commandeered the television from my 11 year old to see what was happening.  When I saw the line of the storms headed for us, I ushered the kids into one of the bedrooms so they could make a "nest" in one of the closets.  Living in a trailer, it probably wouldn't help actually keep them safe if a tornado got close enough to do anything, but it at least makes them feel safer, so I guess that's something.

After seeing how bad the storms looked and that they were in fact heading right for us, but were still a ways away, I told the boys to keep the baby out of trouble and went to put more things, anything that wasn't too heavy or that would be damaged (like my plants) by being in the garage inside the garage.  Shortly after I got back in the house the storm hit. 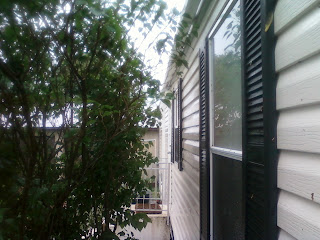 And boy, did it hit!  It was bad enough from just the wind and rain that I was very nervous being in such a narrow building.  It felt like the whole thing wanted to blow away!  The lilac bush outside the front door was pounding on the house pretty hard and I'm pretty confident that if I hadn't trimmed it back away from the house the other day, those branches probably would have caused some serious damage!


As it was, we didn't get any damage...this time.  It is always very scary though.  And tornado season is just beginning.