I Need a Vacation--or some chocolate

It just figures that the only day this week with decent weather for working outside in the garden was the day that we spent all day driving.  It has been raining non-stop since then and it is driving me crazy!  It doesn't help that the kids are getting serious cabin fever too, so they are purposely doing things to drive me, and each other, more crazy.

Not only has the flood incessant downpour been my undoing, but I've been not so happy with the result in some of my other attempts of things.  Like last night, I was trying to save some skim milk going bad (before the sell-by date!  Grrrr!) by making it into yogurt, but the evil demon monkeys kids wouldn't stop fighting and distracted me to the point that I completely forgot I had milk on the stovetop and it boiled over, making a huge mess, and burning it badly enough that I couldn't think of any possible way to make it into anything edible.  Fortunately, not all of the milk had fit in the pot, so there was about a quart that could be done over, but I haven't tried it yet to see if it worked or if the milk was too far gone.  In retrospect, maybe I would have been better off trying to make some ricotta.

Anyway, it has largely been one of those weeks were all the little things make it feel like the world is tumbling down.  I need a vacation...or some chocolate.  We don't usually have marshmallows in the house, because I don't allow the kids to have artificial colors and even the white ones usually have Blue 1 in them, but I found some marshmallows at a dollar store the other day that didn't, so they've been my salvation.  I've been making microwave s'mores--one of only two things microwaves are good for in my opinion (the other defrosting when you forget to get something out to thaw properly).  They are quick, easy, and cheap at about $.22 each (based on my most recent purchase of the ingredients at the store on the corner of the trailer park, which I'm sure is way overpriced!). 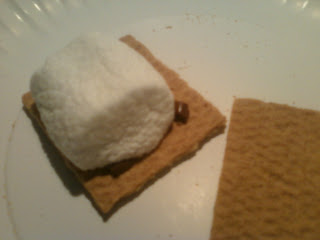 Put half the graham cracker on a microwave safe plate.  Break the chocolate piece into 4 smaller pieces and arrange on the plate.  Place marshmallow on top.  Microwave until the marshmallow starts puffing up, about 5 seconds.  Watch carefully, since if you let it go too long, it will explode and that will be no fun at all!  Remove from microwave and top with other half of the graham cracker.