Well, we survived yesterday's many, many hours in the car.   Barely.  I thought I probably should share what worked and what didn't, especially since I was so surprised by a lot of it!

The kids were super excited about the different packs.  I asked them to wait until we were on the freeway before breaking into the first one, but they couldn't stop themselves (and since I was driving, I couldn't stop them) from getting into them before we were even out of the trailer park.

, in my son's pack.  I didn't know what they were going to do with it when I put it in there, but my son really wanted it, and somehow it kept them happy for about 20 minutes without any other toys involved!

Shortly after they had moved on, my daughter threw up all over herself.  I think it was just a combination of too much excitement, motion of the car, and a cream filled doughnut she ate for breakfast.  It was a real mess...and I didn't bring an extra outfit for her.  Oops.  That definitely goes in the what didn't work category!  I should have brought extra outfits for everyone, not just the baby, just in case.  My mom saved the day and washed out her clothes at a rest area we stopped at for a quick potty break, partially dried them under the hand dryer, then set them on the dashboard to finish drying in the sun.  By the time we reached our mid-point break, the shirt (which was long enough to cover her bottom) and tights were dry enough to wear and the skirt was dry enough by the time we reached our destination. 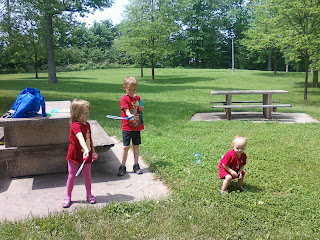 Having multiple packs for different parts of the trip worked great.  I think that kept things fresh and kept them from getting bored more of the trip.  There was an extra sense of anticipation as well and gave them something to look forward to sooner than the end destination.

For much of the trip, workbooks ruled, with the kids wanting to work in them enough that I had to remind them that the mid-point break was for playing and they needed to run around some, since we still had a lot of traveling to do.  This was also true for the return trip--I quickly learned the glow sticks were not the good idea I thought they would be after dark, since they just ended up hitting each other with them and fighting over them.  Instead, the workbooks for the little ones and the logic problem book

I brought along for my 11 year old continued to be a success.  They did end up needing the dome light on to work on them, but there was enough external light that it wasn't really a distraction.

The real winner the entire trip was bubbles.  My son really loved the Grab-a-bubbles

(linked to Amazon for illustrative purposes only.  They are charging way too much on there!) and went through three tubes on the trip.  My daughter thought they were "slimy" and preferred more conventional bubbles stuff, which I actually purchased for this trip (3 small containers for a dollar) partially for the convenient packaging and partially for the novelty.  During the play break, the giant bubbles

(which weren't very giant by my standards, but the kids liked them) were a huge hit as well.  One of the great things about the bubbles as well is that, in addition to entertaining the kid(s) blowing them, they entertained the baby!
Even though everyone was (mostly) happy and (mostly)well behaved during the car ride, the in between part at dinner and my son's 6th grade graduation was another matter.  Oh, well.  No trip is perfect I guess.  Maybe I'll be able to figure out something to do that next long trip with small children!

Email ThisBlogThis!Share to TwitterShare to FacebookShare to Pinterest
Labels: travel