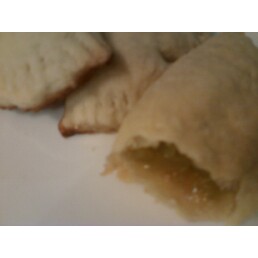 We are getting into rhubarb season here in Michigan and I love it!  I don't have my own rhubarb plants right now, because I've heard it doesn't really like containers and I don't know how long we'll be living here, so I don't want to invest in plants that I may be leaving behind before I ever even get to harvest.  But I do know other people with rhubarb...and they are the nice kind of people that share.  Yay!  So last weekend, I ended up with a fair amount of rhubarb to play with.  It seems to have mysteriously disappeared though.

Okay, it didn't mysteriously disappear.  I ate it.  Well, I ate most of it.  I did share some.  They made me.

The first bit of rhubarb I ate was on a whim.  I had some leftover crust dough the other day from making pasties for dinner, so I cut up about a cup of rhubarb, added about 1/4 cup of sugar, and a sprinkling of cinnamon to the rhubarb and made little tarts to use the crust up.

Those I didn't share.  My son thought they were just more pasties and I didn't correct him.  Some days, I'm a bad mommy.  It was past his bedtime anyway.

Then, a couple days later, I couldn't decide what to have for breakfast, since we were out of bread so I couldn't have the eggs and toast I wanted, and decided that rhubarb crumble wouldn't be a bad breakfast, since anything that has rhubarb, whole wheat, and oats, can't be that bad.

I know I've posted a recipe for rhubarb crisp before, but this is different enough that I thought I should post it too, especially since, unlike my rhubarb crisp recipe (which contains eggs), this can be made vegan by using a non-hydrogenized vegan margarine (the hygrogenized oils don't make it non-vegan, but it does make it laden with trans fats, despite tricky packaging that may claim there is "no trans fat per serving" and having serious heart problems isn't thrifty!) instead of the butter. 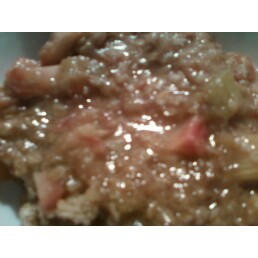 Preheat oven to 350.  Place rhubarb in a greased casserole dish.  Sprinkle white sugar and cinnamon over the top.  Set aside.

In a bowl, combine flour, baking powder, and salt.  Cut in the butter until it resembles coarse crumbs.  Stir in brown sugar and oats.  Sprinkle over the rhubarb.  Bake for 40-50 minutes.  Serve warm or cold.