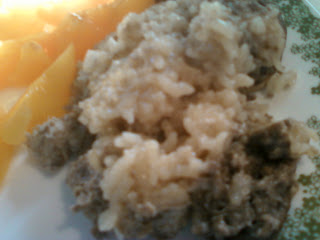 During my last freezer cleaning expedition, I found a couple of frozen chicken breast halves.  They weren't even big ones.  Just tiny little ones.  But, using my powers of thriftiness (and invoking some of my homemade cream of mushroom soup), I managed to feed the whole family with them in a super tasty way.

I thought about posting this recipe the other day, on my anniversary, because it was supposed to be served at my wedding reception, but because of electrical problems (my mother-in-law didn't make it ahead of time like she was supposed to and shorted something out at the old farmhouse that we had the wedding and reception at, so it didn't cook right), it didn't end up being served, so I decided to hold the recipe for another day.  Appropriate, since we had the failed leftovers from our wedding for many, many other days!

Cut the chicken into chunks.  Mix all ingredients in a casserole dish.  Cover tightly and bake at 350 (don't need to preheat the oven) for 1 hour.  Remove the cover and bake for an additional 15 minutes.  Let cool 10 minutes before serving.

This pairs well with green beans and/or peaches.