Well, that tree behind the house that I was told was coming down by the contractor came down in the wee hours of yesterday morning.  Never did get a notification that it was going to happen, so I'm glad he had told me, or I probably would have been pretty freaked out to be woken by the sound of a chainsaw right outside my bedroom just before 8 this morning!

After a nap, I went out and investigated what I was left with.  I found this: 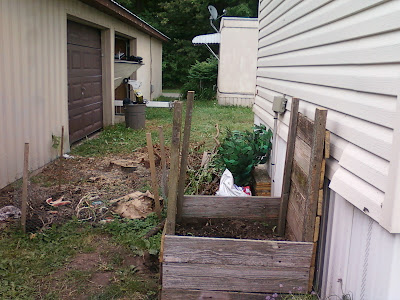 For comparison, here is what it looked like with the tree still there: 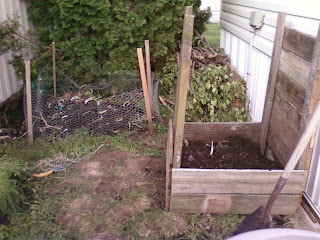 I raided the compost bin for a new project yesterday, so that's why there is less in there, but, even with a lot less in it, it was a lot more visible this morning!  You could even see it from the road.  Oops!

I did find a treasure upon further inspection though: 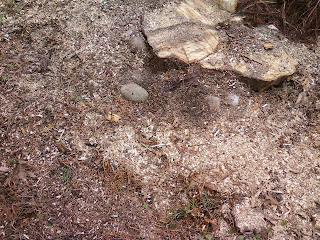 Free mulch!  The needles from the tree that was there and the sawdust left behind from its removal were just what I've been wanting to cover the landscape cloth on some of my beds, so I could take out the bricks that had been holding it in place.  Perfect!

So most of my afternoon was spent gleefully moving that stuff onto my garden beds that needed it. 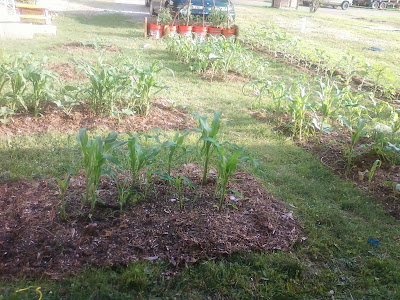 The problem of hiding things that may not make management happy remained though.  I transferred the remaining compost to a broken storage tub I had in the garage and took down the chicken wire and stakes that had been marking the boundaries to hide the evidence until I can get some sort of privacy screen or fence back there.  Then, I took the bricks that had been freed up by the mulch around my plants and built a little shelter around it. 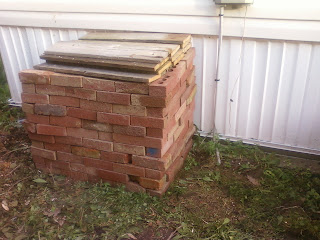 Compost?  What compost?  The boards on top are the slats that will eventually be going on the potato condo, but helping conceal the compost is a nice temporary job for them.

So this is what I ended the day with: 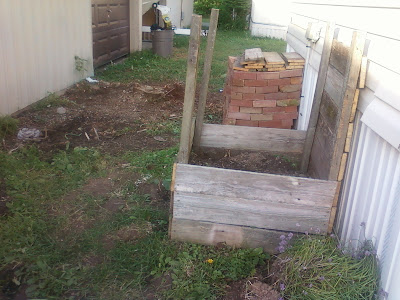 I had thought that my only option back there to put my privacy back was a screen of some sort that could be easily removable, but I talked to some neighbors tonight (the ones that have the demolition derby cars in their driveway.  They are actually demolishing their house since it would cost $3000 to remove and it is too moldy for anyone to live in.  This way, they can take bits out at a time in their pickup.  Talk about thrifty!  I digress though...) and they said that one privacy fence per lot is allowed, so maybe I have more options than I thought!