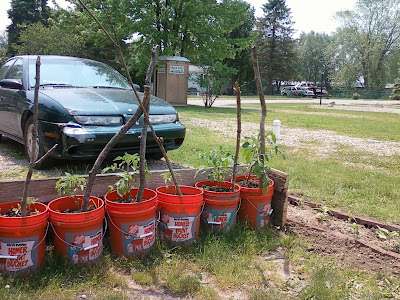 Working in the yard yesterday, this view struck me as extremely funny.  In the foreground, we have buckets growing tomato plants to feed a family (note:  this is rear view, so the view from the road, the buckets were pretty much solid orange), in the mid-ground there is a porta potty (for the contractors to use when working on the garages in the trailer park over the next few months), and in the neighbors' driveway in the background there are two beat up, wildly painted, undriveable cars.  Which did management find objectionable enough that something had to be done about it?

Of course, it was the wholesome food growing in buckets.  This is America, after all, where food doesn't come from farms and gardens and dirt.  Instead, it comes from store freezer shelves (frequently in prepackaged meal forms) or fast food joints. 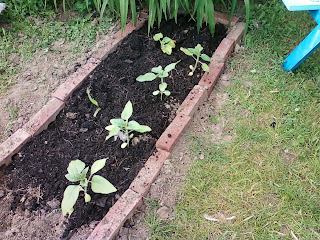 As I posted the other day, I was able to work a compromise with the manager, in that she'd let me keep the gardens, but the buckets had to disappear and the bricks that I had forming a border on the lot (that I would be able to pick up and move for the winter and when we moved, making minimal long term impact on the property) would have to be inlaid into the ground where they would then remain probably forever.

I can now report that all tasks given to me, including the ones the contractor needed done, have been completed.  Missions accomplished!

My dad built (edited to add: It was MOM who salvaged the wood, measured, and cut it. Dad put them together.) the "planters" for me (really, more of a facade, since they don't have a back) out of reclaimed wood. 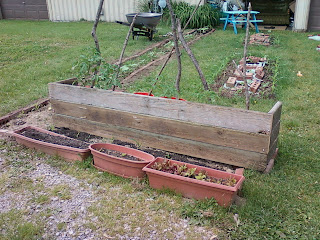 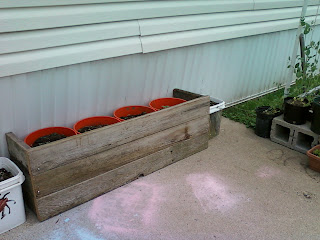 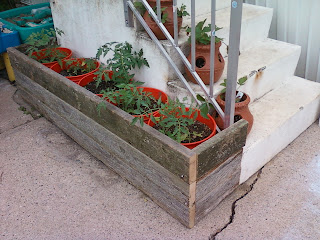 I know you can see the orange in the pictures, but you can't really from the road, and that's what's important here.  My husband thinks the trailer park manager is going to try to make me paint them.  I pointed out that reclaimed wood is hot right now in design, so if I had bought planters like this, it probably would have cost a small fortune and there is absolutely no way they should be painted.  He was insistent that he thought she'd try.  I told him that, if she did, I'd go one of two different ways, depending on that mood that day.  I might bring it on, going to her boss and complain about her overstepping her bounds, harassing me, and causing problems with our family as tenants and then taking it to the media, for some mega-bad publicity, trying to keep a struggling family from having enough to eat.  Or, maybe I would paint them--bright orange!

So right now, I'm right back where I was Wednesday morning, trying to get the weeds under control in the border garden, what I was doing when the manager came up to me that day.