Oh, Shit--and not the compostable kind

Well, it finally happened.  The trailer park manager noticed my, shall we say, landscaping projects.  She was not a happy camper.  The words "over the top" were used several times.  The phrase "I wouldn't have approved this if you'd asked" was uttered (which is why I didn't ask.  Duh!).  Fortunately, she also recognized that I'd done a lot of work in the yard and respect that.  Finally, she decided that, if I got rid of the brick border "wall" I was so proud of (seriously, this is like the fourth post in a row I've alluded to it or mentioned it outright) were to either disappear completely or the bricks were laid into the ground so they weren't sticking up, she could live with that.  I also needed to draw out everything I'd done so it could go on record that she "approved" it, with the caveat that I'd plant grass and clean it all up when we moved, and I guess there is some other form that has to be filled out with that too.

The buckets were a major point of contention with her though.  She really hates the buckets and said they have to go, either planting them in the ground or putting them in a nice planter instead.  Since I'm afraid moving the plants in them would put them at risk for killing them, I really don't want to do this!  I could probably fight it, since I'm pretty sure it doesn't actually say in the lease anywhere that I can't have buckets in the yard, but I'd rather not kick the hornets nest, especially since I could tell she was trying to be accepting of what I'd done.  I asked if maybe I could just paint the buckets and take the handles off them so they would look more like planters.  She thought about it and decided that, if I painted them beige or something to match the house (seriously? Blech!) and took the handles off, I could keep up to six of them.  I had another idea for how to deal with the buckets--don't move them.  Instead, I'm going to get some reclaimed wood and built planters around them!  That should make everyone happy, well, except for it being something else to add to my ever-growing to-do list!

After she left my yard, I got cracking on drawing the picture of what I had going on for the approval form, like she wanted.  I got it done and handed it to her while she was still in the area, since she was just talking to a neighbor.  She reiterated that her main issue at this point was the buckets, so I assured her that I would make them disappear.  She seemed pleased with that answer and drove off.

As she left the neighborhood, I breathed a huge sigh of relief that she didn't notice the compost pile or the potato condo growing behind the house (Oops, I forgot to put those on the diagram as well!  Tee hee).  I'm pretty sure there would have been no compromising on those!  But my potatoes and the rest of my plants seemed to be safe, so I was more or less satisfied with the exchange, even if I was a little shaky from the adrenaline pumped in by the threat and a little upset about the additions to my to-do list.  All in all, I figured I came out more or less on top and didn't have to worry about what would happen when she noticed any more.

The a truck pulled up in front of the empty lot next to us and put a porta potty in the empty lot next to us.  I wasn't sure what exactly that meant, but it couldn't be good!  I sent the kids to investigate while I was still reeling from the last encounter, thinking maybe they'd be putting a new trailer in on some of these empty lots next to us.  I was quite concerned about that possibility, since that would put most of my garden in shade!  The kids were distracted by the puppy the man was carrying though and didn't find out what was going on that warranted a porta potty brought in.

I shouldn't have worried about not knowing what was going on though, since shortly, the man with the puppy came up to talk to me directly.  He asked if I got the notice yet.  ????????  Apparently, they are going to be cutting down the tree behind my house.  Okay, that's fine--but he didn't stop there.  Then he started to tell me that anything right up next to the garage would have to be moved.  They were going to do some major remodeling on all the garages, including painting, so my potato condo and compost heap would have to be moved.  Joy.

He then asked if we got water in our garage when it rained.  I told him it did and then he told me that meant they'd be putting crushed concrete (I think that's what he said anyway) in the floor of the garage.  This meant that they'd have to drive something up to the garage about 30 times, crushing my garden in the way. %#% *&(% ^&$% #$%@ #$@& *%^&% ^$%% #$%@ #$@#$@!!!!!!!!!!!  After discussing the possibilities of me transplanting the corn, cucumbers, squash, melons, and beans that all would be destroyed by this procedure, he said "You know what?  We'll just save your garage for last.  That way, when we need to get in here, it will be time for you to have this stuff harvested anyway."  I was so relieved I almost cried.  He then went on to say that if park management had a problem with that, to tell them to talk to him and, since he owned the contracting company doing the work, it was his call, not theirs.  I gushed appreciation for that and told him I'd be happy to give him some of the yummy goodies from my garden for his troubles, but he told me he doesn't eat stuff from gardens, that he eats out every day.  I feel bad for the man, but I offered him some home cooked goodies instead then.  He just smiled and told me to have a good day.

So it looks like the Trailer Park Homestead is safe again, although my to-do list got a lot longer today!  These two visits put all of this stuff on there: 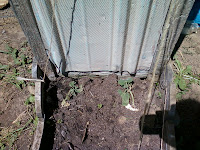 And here I was starting to think I could maybe get caught up on things around the house soon.  *sigh*