When I tweeted that the potato condo fell apart a couple days ago when I was moving it or when people were reading about the extra challenges I've been dealing with lately on the Trailer Park Homestead and mentioned that I had to move the potato condo, I'm sure at least some people were wondering what the heck is a potato condo? so I figured I probably should address that. 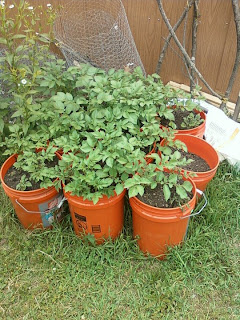 Last year, I grew potatoes in 5-gallon buckets behind the shed.  I figured that was the best way to avoid a run in with the trailer park manager there, who, to put it nicely, is a mega-douche.  It may have kept him out of my hair, but I wasn't thrilled with the results.  The potatoes were small and few, and we ate the entire harvest in a couple of days.  While it was growing, I had to buy potatoes from the farmers' market.  There had to be a better way.

One of these times that was buying potatoes from someone at the farmers' market, the farmer I was buying them from told me about a potato growing method that he'd heard about where you build a box using slats and then you can harvest a few potatoes by removing the bottom slates before the entire crop is ready to harvest.

Then, I stumbled upon an article online about growing 100 pounds of potatoes in 4 square feet!  Wowsa!  And it looked to be the same kind of box that the farmer had told me about.  Definitely something worth looking into further!

And then I decided not to grow potatoes this year.  I had other sources of free potatoes for the year, so I let it go.  Still, I'd see other bloggers like Michael Nolan (whose name you may recognize as a guest blogger on this blog last month) blog about, their potato condos, and I got a little envious, especially when I saw this potato condo rock video (also by Michael Nolan.  He's quickly become one of my gardening heroes!):


I wanted a potato condo so bad after I saw that.  But I was going to be strong and hold off for this year.  After all, I have so many other projects going on around here, I really didn't need another!

Then, my mom gave me some seed potatoes she didn't need.

I stared at those seed potatoes for quite awhile, searching for answers.  Should I or shouldn't I?

Finally, I decided that, with so many hungry people in the world, it would be wrong to let these seed potatoes go to waste.

I was going to get a potato condo!  I got a hold of some reclaimed wood (I believe it was a farm fence in its last life), and convinced my husband to cut it to size and build it for me as a Mother's Day present.  My box is 2.5ft x 2.5 ft and will be about 3 ft tall when finished, so slightly bigger than the 4sq ft that is supposed to be able to produce 100 lbs of potatoes, but no where near as large as Nolan's.

He built up the back side of it, so I could set it right up next to the garage like I wanted (and why it had to be moved *sigh*) and not have to worry about putting the slats on that side.  I didn't bother tilling under it like Michael Nolan did though.  Too many wires and things back there to worry about (and I don't have access to a tiller).

I set a layer of newspaper under it (didn't bother with that part when I moved it) to keep the weeds from popping through while the dirt was at its thinnest.  Then, I put a couple inches of compost on top of the newspaper.  I set my seed potatoes on that layer of compost, then covered them with a couple more inches of compost.  I watered it and then started watching.  It seemed like it took forever until they sprouted!  When they did, I mercilessly covered the sprouts with more compost.  Every time those poor plants pop through, I bury them.  I'm cruel that way (I probably should back off and not be so quick to bury them actually).  When the pile in the box reaches the top of the current slats, I'll add more slats to make the box deeper and keep burying them until I run out of slats.  Then I'll stop pestering the poor things and let them live their lives.  After that, it's like any other method of potato growing, except that I don't have to wait until the end of the season and harvest all the potatoes at once!

I have the power to steal potatoes from the bottom before the season is over.  I can just take a slat off the bottom, reach in, and grab me some spuds!  Considering the slats were falling off when I moved it, I don't think this will even be very difficult!

I was worried that the move would stress the potatoes out and maybe even kill them off, but considering how many sprouts I've buried since then (while giggling maniacally, since it's more fun that way), I think they'll be fine!  Yay!  Some good news after my recent issues!