So the much anticipated, by me anyway, community-wide yard sale was yesterday.  I had spend a fair amount of time gathering up things we didn't need any more to get rid of at this event, since when possible, I'd rather make a little cash getting rid of my stuff than giving it away, although most things I have no problem doing that as well.  I had way too much crap to get rid of, and not the useful, compostable kind, but rather the kind that piles up in the house and garage and gets in your way of trying to get anything done and completely bogs down your life.  I went to bed (a little) early (2:30am) and got up about 4 hours earlier than I usually do (so 7am instead of 11am-ish) in order to set up.  Despite the early hour and lack of sleep, hope for the day's event and the gorgeous weather kept my spirits bright.

It didn't take long to realize that things weren't going to go well.  I quickly discovered that everyone that came by my sale lived in the trailer park.  I started to wonder if it was really advertised in the papers like we were told it would be.  My husband called en route to work and said there was something going on at the nearby fairgrounds and suggested that maybe people would come from there after the festivities were done there, so I kept my hopes up that that's where everyone was and things would improve later.  By 2 o'clock, I could barely keep my eyes open and the baby was down for a nap, so I was very tempted to take a nap, but I was too afraid that I'd miss prospective customers.  Finally, I gave up and decided to rest my eyes for a bit, but kept my ears open for movement outside or cars pulling up.  I rested for about 45 minutes and heard nothing.  When I looked back outside, nothing had been touched, so I highly doubt I missed anyone. 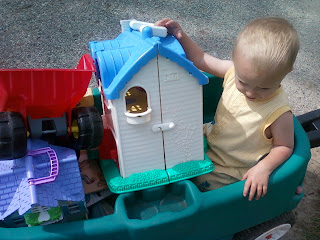 Meanwhile, I was itching to go to see what others had out to sell.  Finally, about a half hour before the sale was scheduled to end, I decided to go for it.  I left an envelope outside with a note on it for people to pay what they felt things were worth, popped the now awake toddler in the wagon, and took off.  Talking to the other people having sales, they all questioned whether it was in the paper, one lady even going as far as saying her friend checked the paper and didn't see it!  Well, no wonder business sucked!  I did find some treasures though--2 boxes of wide-mouth canning lids and rings

(most of my canning jars are wide mouth) for $1.50, a couple wooden puzzles

When I got back to my own sale, there was nothing in the envelope, but I could tell the roaming band of neighborhood kids I'd passed earlier had been there since some of the toys had been played with.  I wasn't surprised by either of these things.  By this time, it was "officially" (in quotes because this is what we were told would be in the paper, but apparently nothing was in the paper) quitting time, but I decided to leave things up for a while longer in the hopes that someone would miraculously come by and buy tons of stuff that I would then not have to put away.  It also occurred to me that I could post that I had yard sale leftovers on Freecycle and get rid of it that way.  I wouldn't make money that way, but it wouldn't be cluttering up our lives either, so I considered that a fair trade.

Just as I was about to go inside to post the leftovers as an offer, I noticed dark clouds threatening in the distance.  Rather than pulling up my email, I checked the weather--and groaned.  Sure enough, there was rain coming.  I had about an hour to get everything under cover before it hit.  So much for getting rid of it!  I started piling it in the garage as fast as I could.  I had just covered the love seat that I'd need my husband's help to move (he was still at work) with a tarp and put away the last of the things I could move myself when the first rain drops hit.  So now my garage is piled up with stuff I don't want or need anymore.